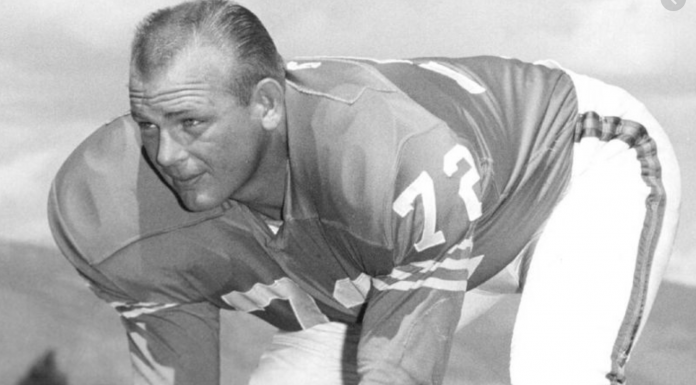 Fox News – Denver Broncos great Jerry Sturm, who helped the FBI turn in a guy who wanted him to throw a game, died Wednesday. He was 83.

Sturm was an offensive lineman and two-time Pro Bowler for the Broncos. He also played for the New Orleans Saints, Houston Oilers, and Philadelphia Eagles.

Sturm was named one of the 100 greatest Broncos players of all-time.

His cause of death was unclear. He had been said to be suffering from dementia.

Sturm recalled to the Houston Chronicle in January 2004 he was asked to throw a football game for a guy and a bookie in exchange for $10,000.

“The guy and a gambler from L.A. offered me a bribe to snap the ball badly on extra points and field goals, and maybe blow a snap to the quarterback — stuff like that,” he told the paper. “So I turned ’em in.”

His family said that they would donate his brain to the Concussion Legacy Foundation at Boston University to study how football affected it … Read more.

During his 15-year professional career, Jerry Sturm played in 2 Pro Bowls. After being a part of many other NFL teams, Jerry made his way back to Denver to open The South, one of the best American/Mexican restaurants in town.

Jerry Gordon Sturm (December 31, 1936 – June 17, 2020) was an American professional gridiron football player. He played college football at the University of Illinois at Urbana–Champaign.

After retiring from football, Sturm owned “The South” restaurant along with his wife, Debbie, in Englewood, Colorado The restaurant offers a selection of Mexican and American food.

Sturm died on June 17, 2020. He had been suffering from dementia prior to his death. His family announced that they would be donating Sturm’s brain to the Concussion Legacy Foundation at Boston University to study the effects of brain trauma from Sturm’s football career.

“The Most Common Early Signs Of Dementia”