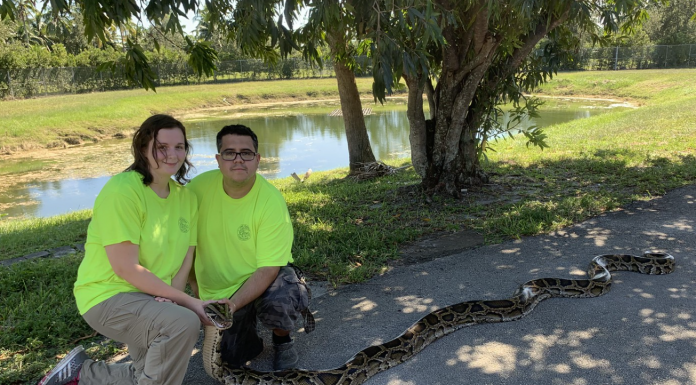 ORLANDO, June 10, 2021 – Just as the governor announced the start of python hunting season in Florida this month, researchers at the University of Central Florida have published a first-of-its-kind study that shows that near-infrared (NIR) spectrum cameras can help hunters more effectively track down these invasive snakes, especially at night.

The snakes, which can reach 26 feet in length and 200 pounds, have invaded the Everglades in Florida — threatening native species and disrupting the ecosystem. The number of common native species observed in the Everglades since the snakes were first discovered in the 1990s dropped in some species by 90% through 2010, according to an earlier study.

Since then, the state has been implementing mitigation strategies and encouraging residents to hunt down the massive snakes. On average snakes removed from the Everglades are about eight feet long, according to the Florida Fish and Wildlife Conservation Commission.

The new study found that by using NIR cameras, pythons could be detected 20 percent farther away than with visible cameras. Researchers say that with more work they may be able to develop an automated snake detection system. That could be a game changer especially since the pythons are marching northward and could threaten native species as far north as Virginia and Texas to the west.

“Manual removal of Burmese pythons has been the most effective management strategy, but snakes are difficult to see due to their natural camouflage,” says Kyle Renshaw, a co-author of the study and an assistant professor at CREOL – UCF’s College of Optics and Photonics.

“NIR cameras will help python hunters find and remove pythons. These small, inexpensive cameras could be mounted on trucks or drones to help catch the hard-to-find pythons. Using cameras also opens the possibility for automated detection using computer algorithms to search the imagery faster and more comprehensively than the hunters can do on their own.”

Jennifer Hewitt, a graduate student in Renshaw’s lab led the study, which was published this week in the journal Applied Optics.

This research is one example showing how cameras can be “tuned” to improve performance of a specific task, the researcher say. The detection band, time constants, lens parameters, image processing and algorithms provide a rich set of variables to optimize a camera system for a particular application. The work with the snakes was based on viewing from a stationary position, but the team hopes to expand its work to include moving sensors.

“That could have big applications in search & rescue, explosives detection, border security, etc.,” Renshaw says. “Jen is developing and testing models for time-limited search using a moving camera as we speak as part of her thesis.”

How did they do it?

The work builds on previous spectral reflectivity characterization of pythons conducted at CREOL by then UCF Professor Ron Driggers.

Hewitt then wrote software to randomly present images to the volunteers, asking them to “click” on the snake in the scene. Some scenes had no snakes. User responses were collected and analyzed. Volunteers spent an hour looking at imagery on a computer to locate pythons and clicking on the python image.

“For both day and night conditions, volunteers were able to detect the pythons further away with NIR than with visible,” Hewitt says. “From here, we are continuing to fine tune the camera system to further improve the detection rate.”

The NIR cameras were tuned to the snakes and appear to be more effective at night because the snake’s camouflage doesn’t create the same glare it does in the sunlight.

Renshaw joined UCF in 2015. He has a doctorate in applied physics and a master’s degree in electrical engineering from the University of Michigan. He also has a bachelor’s degree in engineering physics from Cornell University. He leads the Thin-Film Optoelectronics (TFO) Lab, which conducts research and development on materials, components, and technologies for imaging systems.

Hewitt is a doctoral candidate at UCF CREOL, studying infrared sensing systems for human task performance. She has a master’s degree in optics and photonics from UCF CREOL, and a bachelor’s degree in physics from the University of Maryland, Baltimore County.

Other co-authors are Driggers, now at the University of Arizona and Orges Furxhi at imec, an international microelectronics company with offices in Florida.

Image: Florida Fish and Wildlife Python Action Team Record Snake
This huge 18’ 4” invasive python is the largest ever captured by our Python Action Team! Not only did we reach the impressive milestone of removing more than 900 invasive Burmese pythons from the Everglades, but Cynthia Downer and Jonathan Lopez brought in this 98 pound, 10 ounce snake from the Big Cypress National Preserve! This snake is the largest captured by our Team, and second longest python ever removed in the state.