Is Virus Becoming Immune To Vaccine? 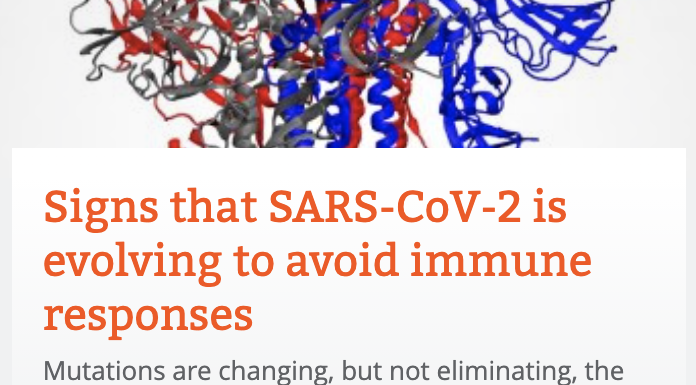 Mutations are changing, but not eliminating, the antibody response to the virus.

ARS TECHNICA – Over the summer, you could almost hear a sigh of relief rising from the portion of the research community that was tracking the evolution of the SARS-CoV-2 virus.

Viruses, especially those new to their hosts, often pick up mutations that help them adapt to their new habitat, or they evade drugs or immune attacks.

But SARS-CoV-2 seemed to be picking up mutations at a relatively sedate pace, in part because its virus-copying enzymes had a feature that lets them correct some errors.

But suddenly, new variants appear to be everywhere, and a number of them appear to increase the threat posed by the virus.

A new study helps explain the apparent difference: while new base changes in the virus’s genetic material remain rare, some deletions of several bases appear to have evolved multiple times, indicating that evolution was selecting for them.

The research team behind this new work found evidence that these changes alter how the immune system can respond to the virus.

The researchers’ interest in deletions started with their involvement with an immunocompromised cancer patient, who held off the infection for over two months without being able to clear the virus.

Samples obtained from late in the infection revealed two different virus strains that each had a deletion in the gene encoding the spike protein that SARS-CoV-2 uses to attach to and enter cells.

When the researchers searched a database of other viral genomes, they found six other cases where the same or similar deletions seem to have evolved in other patients.

This caused them to go back and look at a collection of nearly 150,000 viral genomes.

They found that over 1,100 of them carried deletions in the spike protein.

But critically, they found that these weren’t distributed randomly. Ninety percent of the deletions clustered into four distinct areas of the spike gene.