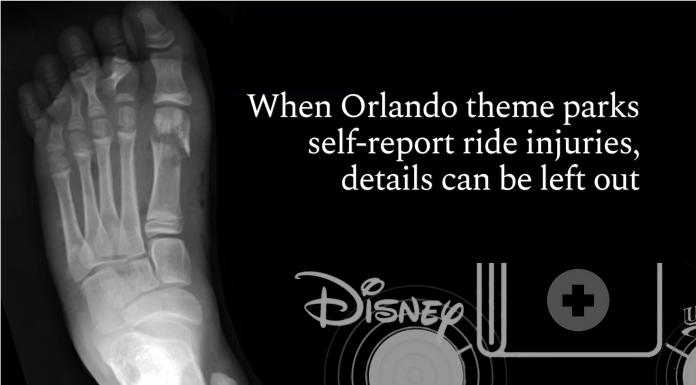 “The public doesn’t always learn how badly people get hurt in the most serious accidents at Florida’s major theme parks because of a self-reporting system that lacks government oversight.”

On Universal’s E.T. Adventure, an 11-year-old boy crushed his foot and leg as the ride pulled up into the exit platform last year.

The force of the impact sent the boy’s shoe flying, and he broke toes on his left foot and his tibia and fibula, according to the family’s attorney Ed Normand. The child lost so much blood that his uncle fainted, Normand said.

Universal reported the injury as “foot pain” to the state.

“You ain’t kidding this is foot pain,” Normand said. “This report is ridiculous.”

At Disney World, a 16-year-old “felt ill” after riding the plunging Tower of Terror several times in 2005, according to Disney’s disclosure to the state. The girl said she had a stroke, according to court documents filed with her lawsuit against Disney.

And a 38-year-old man with a heart condition died in December 2016 shortly after getting off a Universal ride without the incident being reported to the state at all. Universal wasn’t required to disclose his death but ethically should have, according to family attorney Lou Pendas.

The public doesn’t always learn how badly people get hurt in the most serious accidents at Florida’s major theme parks because of a self-reporting system that lacks government oversight. Critics say Universal, Disney and other parks can downplay what happens without facing consequences.

As part of a nearly 20-year-old agreement, Universal, Disney, SeaWorld, Busch Gardens and Legoland self-report visitors’ health problems on rides to the Florida Department of Agriculture and Consumer Services as long as they require at least 24 hours of hospitalization … Read more.