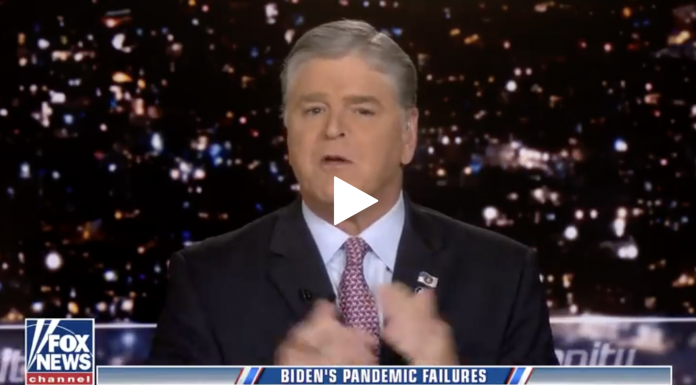 Fox News host Sean Hannity criticized the Biden administration’s botched handling of COVID-19 Friday on “Hannity,” saying it was “politics at its worst.”

The host also slammed the president for “squandering” all of the tools former President Trump gave him to fight the pandemic.

“Let’s start with the vaccines. Last year while President Trump was working with scientists and major pharmaceutical companies to cut all the red tape and expedite safe effective vaccines, Joe Biden and Kamala Harris, their friends in the media mob, their press secretaries, well they were busy sewing doubt and pushing anti-vax, anti-Trump conspiracy theories.

“Of course, we know why, all for political gain.”

Hannity called out the administration’s hypocrisy for requiring a vaccine they said they wouldn’t trust because of Trump during their campaign.

“Of course, the mixed messaging from the White House is almost impossible to fully track at this point.

“Remember Biden then declared a new policy: vax or mask, remember that?

“Now it’s vax and mask, and vaccine mandates and mask mandates and other draconian new restrictions, and the possibility of yet more shutdowns,” Hannity continued.

Breakthrough cases, including prominent Senator Lindsey Graham, are making the future “uncertain” again according to Hannity, who said COVID mandates will continue to hurt small businesses …