Florida Man Needs 3 Days To Get Iguana Out Of Toilet 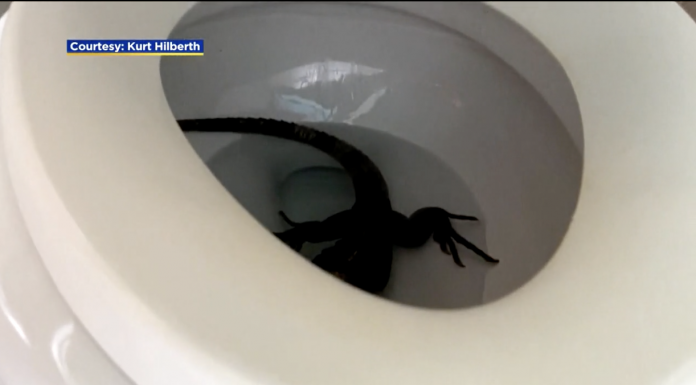 "Water was flying everywhere, it was total chaos in the bathroom ... "

HOLLYWOOD (CBSMiami) – Imagine you go to sit down on in the most popular seat in the house and there’s an iguana thrashing around right underneath you.

That’s exactly what happened at Hilberth Home in Hollywood when a spiny tailed iguana was found splashing around in the toilet bowl.

Hilberth told CBS4’s Ted Scouten he first noticed the unwanted toilet intruder out of the corner of his eye, when he went to the bathroom to brush his teeth.

“It was so big that it was not submerged completely in the water. And it’s got that tail that whips back and forth,” Kurt said.

Dressed in protective clothing and gloves and with encouragement from his family, Hilberth went to fish it out, but it kept swimming back down, eluding capture.

“All iguanas carry a variety of bacteria. The things they’re most famous for are salmonella and botulism, but there are other bacterial infections you can get.”

Three days later, he almost got it. [We surmise the Hilberths live in at least a two-bathroom house. – HH]

“I was able to grab him by his back legs and part of the tail. I was pulling out, he was pulling in, the tail was going back and forth, water was flying everywhere, it was total chaos in the bathroom,” he recalled.

The iguana had other plans and swam back down, into the bowels of the toilet.

“Unfortunately, I was left with a handful of tail,” as Kurt explained the tail broke off in his hand. He rushed it outside, it was still moving.

That’s when Kurt called in the experts …

WATCH: Video of iguana in toilet of Hollywood home …

WHAT TO DO IF THERE’S AN IGUANA IN YOUR TOILET