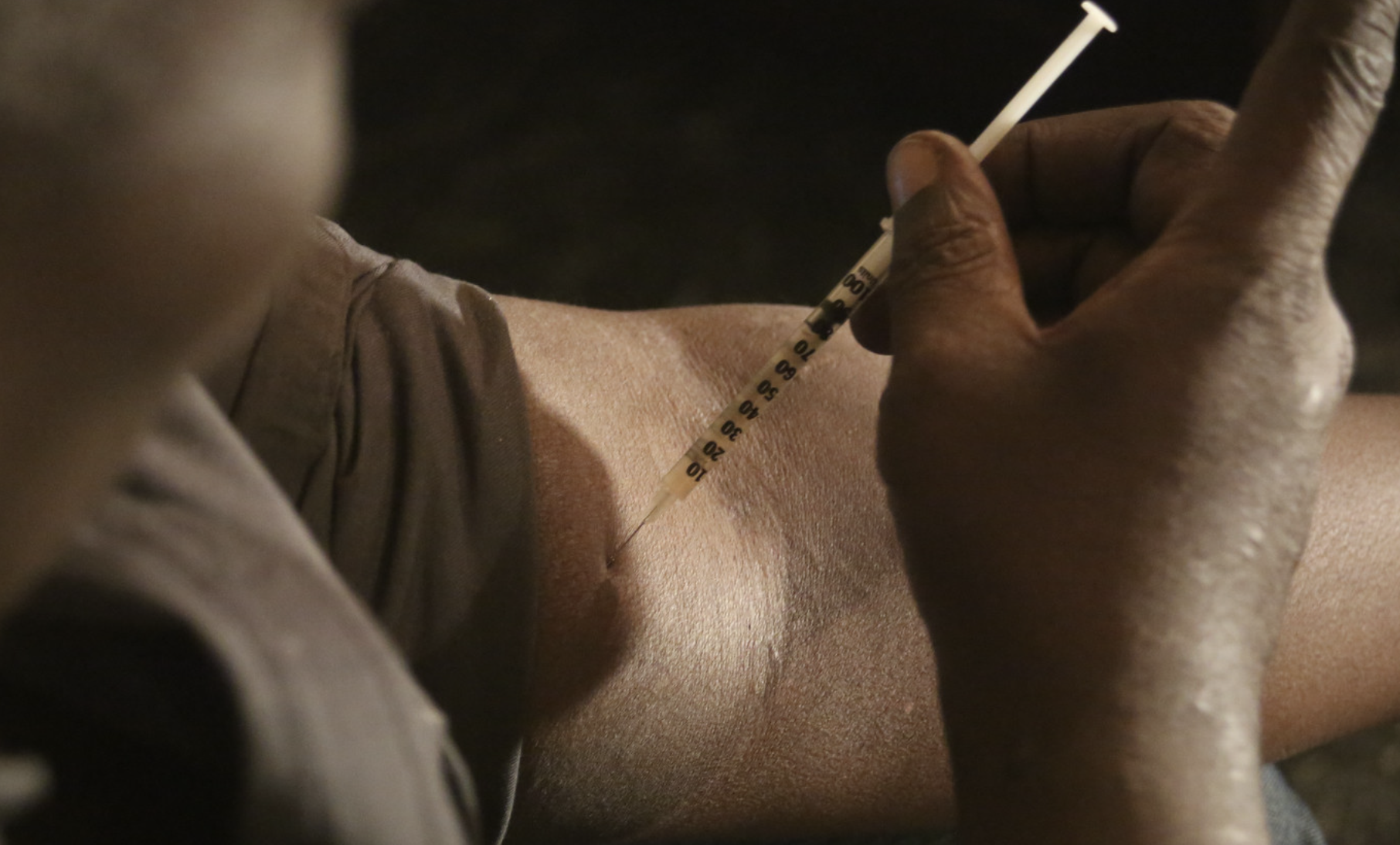 “Harm reduction programs operate on the fringes of legality,” reports Kaiser Health News, which then goes on to paint drug-abuse enablers in a positive light.  – Headline Health

KAISER HEALTH NEWS, HOUSTON — Casey Malish had just pulled into an intersection in the 2nd Ward when a woman with tattoos and pinkish hair unexpectedly hopped into the back seat of his gray Mazda. He handles outreach for the Houston Harm Reduction Alliance, a nonprofit that helps drug users like her stay alive.

The woman, Desiree Hess, had arranged to meet with him, but Malish, as usual, wasn’t sure what to expect on this recent afternoon. Hess told Malish to take her to near the Value Village thrift store before she explained why she was so frantic.

Earlier that day, around 2 a.m., Hess said, a woman — a “teeny-tiny little girl” — overdosed in the warehouse where Hess was hanging out. No one there could find naloxone, a medicine that reverses opioid overdoses, and the woman’s lips turned blue. Hess said she blew into the woman’s mouth, trying to keep her alive, while others covered her with ice.

Finally, someone found some naloxone, often referred to by the brand name Narcan, and sprayed the medication into her nose. After the woman regained consciousness, Hess made a decision.

Keeping addicts addicted only serves to line the pockets of drug cartels and finance the expansion of their deadly industry. – Headline Health

Malish drives city streets handing out needles, naloxone, cotton balls, and condoms from the trunk of his sedan. But the Houston Harm Reduction Alliance, which tax records show operates on less than $50,000 annually, can afford to pay Malish only a couple of thousand dollars every now and again. His full-time job is as a research assistant at the University of Texas Health Science Center at Houston.

Malish — a 31-year-old who said he had a problem with alcohol and opioid pills and then heroin before giving them all up nearly 10 years ago — estimated he can reach only about 20 people like Hess a month. Meanwhile, drug overdoses killed 1,119 people in the city last year, according to the Houston Police Department.

President Joe Biden wants to expand harm reduction programs like the one Malish works for as part of a broader strategy to reduce drug overdose deaths, which surged to more than 107,000 nationwide in 2021. But the $30 million plan faces a complicated reality on the ground.

In Houston, as in many parts of the country, harm reduction programs operate on the fringes of legality and with scant budgets. Often, advocates like Malish must navigate a maze of state and local laws, fierce local opposition, and hostile law enforcement.

Regina LaBelle, who served as acting director of the Office of National Drug Control Policy until November, credits the Biden White House with being the first presidential administration to openly embrace harm reduction to curb drug overdoses.

Harm reduction programs tell people who are slowly committing suicide it’s okay to continue their self destructive behavior. This is a bad thing, not a good thing. – Headline Health

She said that the $30 million, tucked into the $1.9 trillion American Rescue Plan Act, is still just a first step and that too many groups rely on an unstable patchwork of grants.

“You shouldn’t have to hold bake sales to get people the care that they need,” said LaBelle, who now directs an addiction policy program at Georgetown University.

Plus, the administration faces limits on what it can do when programs face blowback from state legislatures and local leaders. “What you don’t want to do is have the federal government coming in and imposing something on a recalcitrant state,” she said.

Both Republican- and Democratic-led states have legalized aspects of harm reduction, but many remain resistant.

By 2017, all states and Washington, D.C., had loosened access to naloxone, according to Temple University’s Center for Public Health Law Research. Yet, fentanyl test strips — which help people avoid the powerful synthetic opioid or take more precautions when using it — are illegal in about half of states.

According to KFF, seven states don’t have a program that provides people with clean needles, which help prevent the spread of HIV and hepatitis C, as well as bacterial infections and embolisms that develop when overused, weak needles break off in a vein. And New York is the only city operating injection sites, where people can use drugs under supervision, although Rhode Island has legalized them and the Justice Department has signaled it may pave the way for more sites to open.

Texas is among the states that have been slow to embrace the interventions — and hasn’t expanded eligibility for Medicaid, so Texans with low incomes have limited access to recovery programs. During the 2021 legislative session, lawmakers scuttled a bill that would have rescinded criminal penalties for possessing drug paraphernalia, items such as clean syringes and fentanyl test strips.

That means the Houston Harm Reduction Alliance operates in a “legal gray area,” said Malish. Although it has tacit support from the Houston police and other local entities, the nonprofit could face trouble if it strayed into a neighboring city.

“Programs that facilitate addictions by providing the tools people need to continue using drugs are not helping our community,” Texas Sen. Ted Cruz, a Republican, wrote to KHN in an email. In February, Cruz criticized Biden’s grant program by saying it would fund “crack pipes for all” in a retweet of a story on a conservative website. Fact checkers debunked the story’s claim, but it continues to provide fodder to opponents of harm reduction practices in state and local governments, even in places where overdose deaths are quickly rising.

Louisiana allows local officials to decide whether to authorize syringe exchange programs, but only four of the state’s 64 parishes allow the services. “We know in the public health space how these programs save lives,” said Nell Wilson, project director for Louisiana’s Opioid Surveillance initiative. “But being a more conservative state, a lot of the problem is battling against wide-ranging misconceptions not based in fact.”

Harm reduction programs face backlash in progressive places, too, such as San Francisco, where some residents believe they foster drug use.

“We were disappointed by that number,” said Cate Graziani, co-executive director of the Texas Harm Reduction Alliance, which sought the maximum $400,000 in funding but wasn’t among the two dozen organizations to receive grants. Her group planned to distribute the funds to local outposts such as the Houston Harm Reduction Alliance.

“These programs are still running on a shoestring,” said Leo Beletsky, a public health law expert at Northeastern University. “That is not how public health is supposed to be done.”

Advocates for harm reduction don’t believe such efforts alone will suddenly halt overdose deaths. Addiction is a complicated, chronic disease. And in 2021, overdose deaths jumped 15% from a year earlier, according to the Centers for Disease Control and Prevention. Today, illegal fentanyl and its analogs from Mexico and China have tainted the street supply of counterfeit pills, heroin, and even stimulants like cocaine and methamphetamine, causing both casual users and those with long-term addiction to overdose and die.

As Malish drove Hess past the Value Village to the abandoned strip mall where she usually lives, she said she plans to start methadone treatment for heroin addiction as soon as she can get an ID the city offers to people without housing.

“I’m so sick of seeing my friends die,” said Hess.

When she got out of Malish’s car, he loaded her arms with boxes of syringes, sterile water, injectable naloxone, tourniquets, and fentanyl test strips for her to share with others.

Hess then asked Malish if she could take two quarters she found in the seat cushions of his car to buy drinking water, before walking through the mall’s double doors.