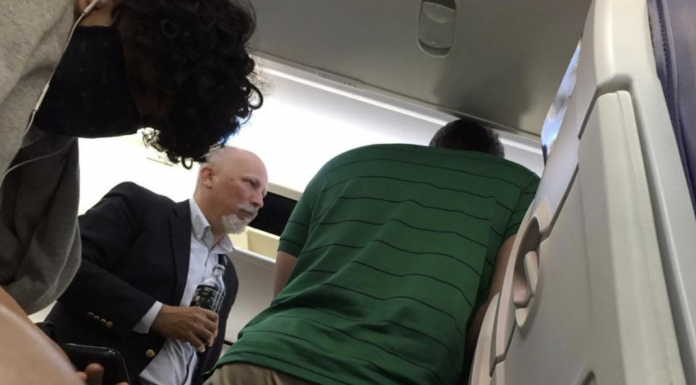 Roy said his refusal was to wear a mask was a protest "to stand up for every student and every hard working American wanting the insanity to end."

WASHINGTON (AP) — A Texas congressman who has been an outspoken critic of COVID-19 mask mandates went without a mask for at least a portion of a commercial airline flight Tuesday evening, an apparent violation of federal law.

The Associated Press was provided a photo and a nearly three-minute video from a Southwest Airlines flight showing a bare-faced Roy chatting with fellow passengers while standing in the aisle of the plane. The video and a photo were provided to the AP on the condition of anonymity by another passenger.

Roy is listed as a co-sponsor on a GOP-backed bill introduced in Congress last week that seeks to bar federal authorities from requiring masks to be worn on commercial airliners or in airports, as well as other transportation hubs such as train and bus stations.

His staff did not respond to multiple calls and emails seeking comment Wednesday, including questions about whether the congressman had been vaccinated.

Roy was issued a formal warning by congressional leaders in May after he and a handful of other Republicans refused to wear masks on the House floor, as then required by the chamber’s rules. In a May 18 tweet, Roy said his refusal was to wear a mask was a protest “to stand up for every student and every hard working American wanting the insanity to end.”

Democratic leaders later relaxed the mask mandate on Capitol Hill after the Centers for Disease Control changed its guidance last month to say it’s safe for vaccinated adults to go without a mask when indoors in most circumstances.

Masks are still required by federal law on commercial aircraft and in all indoor spaces at airports for everyone older than 2 years of age. Those who fail to mask up on planes are subject to civil fines, ranging from $250 for the first offense and up to $1,500 for repeat offenders.

Most U.S. airlines also prominently include mask wearing as a requirement in their written terms of service when passengers purchase tickets, with verbal reminders issued during boarding and safety briefings. Those who refuse can be denied service and removed.

A Southwest spokesperson said in an email Wednesday the airline couldn’t comment on details involving individual passengers, but no “irregularity reports” were generated from the specific flight the congressman was filmed on.

The Transportation Security Administration is responsible for enforcing COVID-19 safety restrictions of commercial aircraft. Agency spokesperson Sarah Rodriguez reiterated that airline passengers are still required to wear masks on planes and in airports, though she did not respond to specific questions about the congressman’s failure to wear one.

Last year, after Roy was exposed to a fellow GOP congressman who then tested positive for COVID-19, he declined to self-quarantine and said he wasn’t worried about catching the virus.

In a July 2020 interview with CNN, Roy questioned the effectiveness of mask wearing for preventing the spread of the virus, especially during “interactions with perfect strangers on an airplane with circulating air.”

“With cotton masks on an airplane, where everybody is pretending like they’re doing something noble to try to save people from a virus on a cylinder with 50 people on it flying through the air,” Roy said in the interview. “My question to you all is how are people wearing a cotton mask on an airplane saving you from circulating virus on an airplane?”