Getting ‘Back To Normal’? NYC Virus Deaths DROP 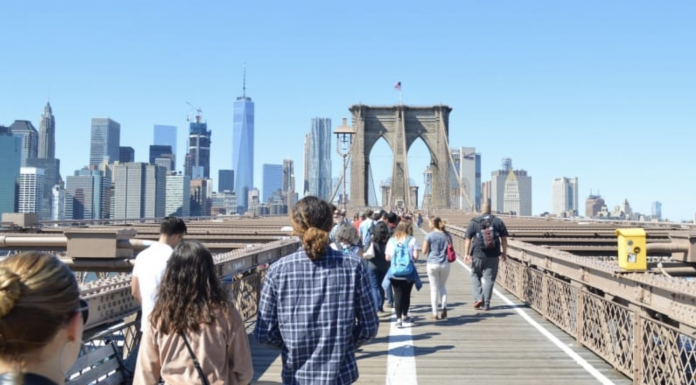 The state reported 422 deaths as of Thursday. That’s the fewest since March 31, when it recorded 391 deaths. More than 16,000 people have died in the state from the outbreak.

“Again, this is at an unimaginable level, and it’s dropping somewhat. But it’s still devastating news,” Gov. Andrew Cuomo said at his daily briefing.

The total number of people hospitalized statewide continues to drop slowly, hitting 14,258, though the number of new patients coming into hospitals is basically flat at around 1,300, Cuomo said.

Though the overall trends provide some hope, the governor continued to stress that any gains could be lost quickly if social distancing restrictions are relaxed too quickly.

A retired farmer in Kansas whose wife has one lung shipped one of the couple’s five masks to Cuomo for use by a doctor or a nurse.

Cuomo read the entire letter at his daily briefing as an example of courage and generosity in dark times.

“Enclosed find a solitary N-95 mask left over from my farming days. It has never been used” read the hand-written letter from Dennis, whose last name was redacted in the copy posted by the governor. “If you could, could you please give this mask to a nurse or a doctor in your city.”

The farmer kept four masks for use by his family, noting that his wife Sharon has diabetes and problems with her remaining lung.

Cuomo’s eyes misted as he brandished a mask at his much-watched daily briefing.

“It’s that love, that courage, that generosity of spirit that makes this country so beautiful. And it’s that generosity for me makes up for all the ugliness that you see. Take one mask, I’ll keep four.”

New York expects to see a budget-busting $13.3 billion drop in tax revenue through next March amid the pandemic, Cuomo said.

Cuomo has frozen pay for tens of thousands of state workers and warned of 20% cuts to state aid for schools, hospitals and local governments.

The Democratic governor is criticizing Congress for having yet to follow through on promises of more state aid in coronavirus spending packages. For a second day, he blasted Republican Senate Majority Leader Mitch McConnell for suggesting states facing shortfalls could declare bankruptcy.

Cuomo dared McConnell to pass a bill allowing states to legally declare bankruptcy, saying it would signal to financial markets and other countries that the nation is in turmoil.
“Pass the law,” Cuomo said. “I dare you.”
___
DISINFECTANTS

New York City Mayor Bill de Blasio responded to President Donald Trump’s musing about the possible use of disinfectants or ultraviolet rays to treat COVID-19 by saying that it’s “sad when you have to correct the president of the United States” on basic science.

Trump noted Thursday that researchers were looking at the effects of disinfectants on the coronavirus and wondered aloud if they could be injected into people. He also suggested that beaming ultraviolet light “inside the body” might be an effective treatment.

Speaking to reporters Friday, de Blasio referred a question about Trump’s comments to the city’s health commissioner, Dr. Oxiris Barbot, who warned that disinfectants can be harmful if ingested or applied to the skin.

“It’s sad when you have to correct the president of the United States on a matter of science and health, but I think Dr. Barbot just did a good job replying to the president, so please let the people of the city know the guidance that she is giving,” De Blasio said.

Cuomo, who met with the president this week, declined to address Trump’s remarks directly at his own briefing.

“I don’t know much about UV rays,” Cuomo said. “Not my job. Not my business.”

Trump said Friday that he’d been speaking sarcastically but a transcript of his remarks suggested otherwise.
___
ABSENTEE BALLOTS

Cuomo said he will order state elections officials to automatically mail every New Yorker a postage-paid application for an absentee ballot. The governor had previously issued an executive order allowing residents to vote absentee in the June 23 primary election.
___
Villeneuve reported from Albany, and Michael Hill contributed from Albany.