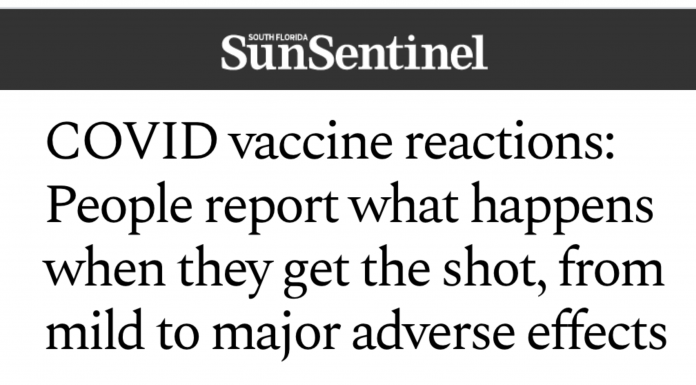 “Remember for the most part we are vaccinating older people at higher risk of many things including death.”

SOUTH FLORIDA SUN SENTINEL – COVID vaccinations have been going into the arms of Floridians for six weeks, and initial reports from people who receive the shots suggest wide-ranging adverse effects — from fevers to strokes — are limited but can be significant.

Some of the most crucial revelations focus on how seniors — studied minimally in trials but considered a priority in Florida — are reacting to the vaccine.

So far, reported side effects range from the common such as fever, chills and headache to the more serious including chest pains, palpitations and stroke.

The Centers for Disease Control and Prevention has a team assigned to investigate all reported reactions, plow through medical records, and identify any patterns.

Floridians have made 417 reports of COVID-19 vaccine “adverse events” through Jan. 22, out of more than 8,500 nationwide.

The CDC also is investigating 16 deaths in Florida that occurred shortly after the individuals received their vaccination.

Those individuals range in age from 56 to 94, and 13 died within two days of receiving a vaccine. Only one had received a second dose, according to reports in the national Vaccine Adverse Event Reporting System. “Every death reported will be investigated to determine the cause,” said Martha Sharan, a CDC spokeswoman …

Many of the most severe reactions reported so far affected people older than 75 who had multiple underlying conditions, including cardiomyopathy, angina, dementia, Alzheimer’s, diabetes, diverticulitis, hypertension and COPD.

Based on self-reported reactions as of Jan. 22, the vaccine reaction tracking database includes this information:

– Sixteen deaths in Florida; 13 are individuals 65 years or older.

Reported reactions represent a small fraction of total vaccinations. Since vaccine distribution began in the U.S. on Dec. 14, more than 26 million doses have been administered, including 1.8 million in Florida.

“Remember for the most part we are vaccinating older people at higher risk of many things including death,” said Dr. Marrissa Levine …