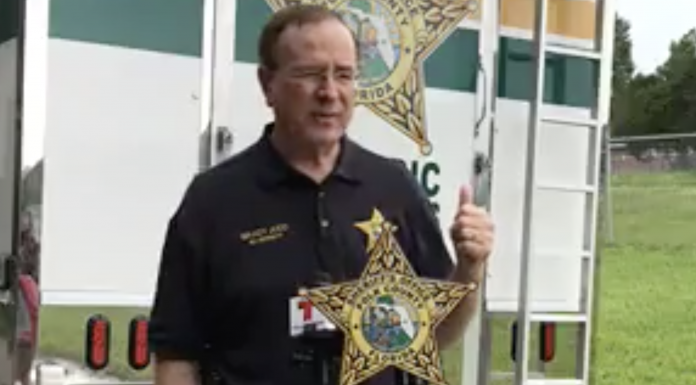 Sheriff Grady Judd said the woman appeared to be within her legal rights to shoot the man who was using a tire iron to break into her home. “This is another incidence where you just should have left,” Judd said. “But when you came back to the house that’s not your home, and you tried to break in to get a girlfriend who didn’t want to go with you, and you’re shot and killed while breaking into the house with a tire iron, that was a bad choice. And it’s the last bad choice he’ll make.” (Polk County Sheriff’s Office)

While the American Medical Association regularly casts gun ownership as unwise and unhealthy, many healthy, law-abiding Americans continue to put firearms to their intended use – protecting life and liberty …

Fox News – A Florida woman shot and killed a man who returned to her home after an argument early Saturday and tried to use a tire iron to smash his way inside, authorities said.

The shooting happened just after 6 a.m. in an unincorporated area of Auburndale in Polk County, Sheriff Grady Judd said at a news conference.

Judd said it appeared the “shooter was perfectly legal to defend her home from a burglar.”

“You have a right to protect yourself in your home and be free from home invaders, armed burglars, and certainly he was armed with a tire iron and making an attempt to come in through the window,” Judd said. “She stopped him. She stopped him permanently.”

The homeowner and the suspect were known to each other, the sheriff said. They had gone out the night before to a pool hall in Lakeland with another man and a woman who was the suspect’s live-in girlfriend. The group of four returned to the woman’s home around 4 a.m. after stopping at a liquor store for a bottle of whiskey.

The suspect and his girlfriend got into a “heated argument” around 6 a.m., and the two men left the home, the sheriff’s office said in a news release … Read more.

ALSO ON HEADLINE HEALTH TODAY: MANDATORY Flu Shots In This State | Accused Wife-Beater: ‘The Virus Made Me Do It’ |  Bar Owners Sue

Maxine Waters Speaks: This Could Get Ugly