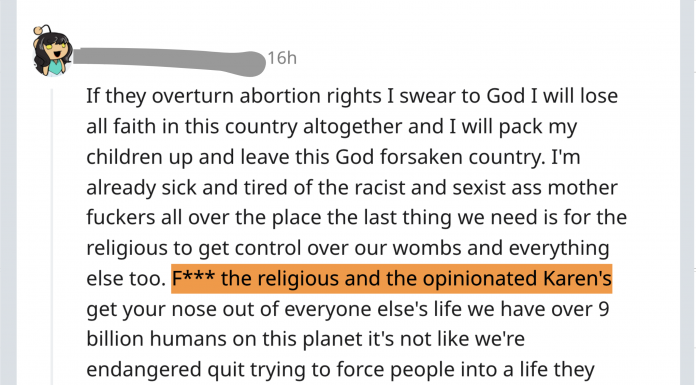 California Abortion Network Gears Up For Influx If Roe Is Overturned

“If they overturn abortion rights I swear to God I will lose all faith in this country altogether and I will pack my children up and leave this God forsaken country. I’m already sick and tired of the racist and sexist ass mother fuckers all over the place the last thing we need is for the religious to get control over our wombs and everything else too. F*** the religious and the opinionated Karen’s get your nose out of everyone else’s life … ” – REDDIT post in support of legal abortion | SOURCE

LAIST.COM – The United States Supreme Court on Wednesday heard oral arguments in a case concerning a Mississippi law that bans most abortions after 15 weeks.

No decision is expected until next year, but if the court lets the Mississippi law stand, that would effectively overturn abortion Roe v. Wade, the 1973 decision that legalized abortion in the U.S.

What This Means To Californians

California would almost certainly leave abortion rights in place, which could make the state a destination for the procedure. States with stronger protections for abortion will attract even more patients, said Brandon Richards, with Planned Parenthood affiliates of California.

Richards says there could be up to a 3,000% increase in people who may come here for abortion care each year if Roe is overturned — most of them from Arizona. Planned Parenthood clinics in California already serve about 7,000 out-of-state patients a year.

Richards cited 2017 data from the Guttmacher Institute, a research organization that supports abortion and reproductive health rights, which found that “1.3 million Arizonans would find their nearest health center within California.”

“We’re seeing a predictable ramp-up already in rhetoric from Democrats, including Democratic senators about how it will be a revolution if the court overturns Roe. This is really inappropriate and dangerous rhetoric.” – Sen. Josh Hawley (R-MO)

California organizations that help people afford abortions are also preparing for an influx of patients.