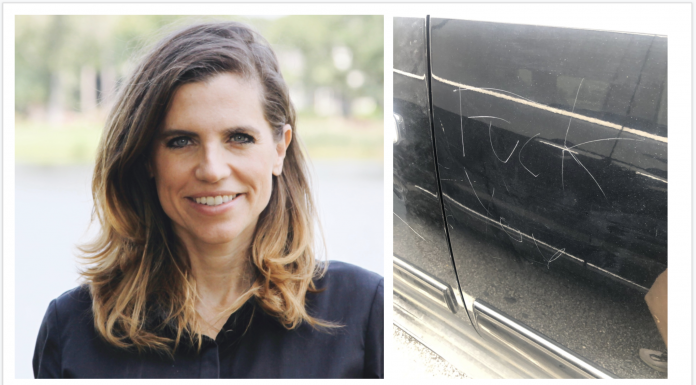 FITS News – South Carolina state representative Nancy Mace was the victim of what appeared to be a non-random act of vandalism in Mount Pleasant, S.C. on Tuesday afternoon, according to a police report obtained by Meg Kinnard of The Associated Press.

A yet-to-be-identified vandal scrawled the words “F*ck You” onto the rear driver’s side door of Mace’s personal vehicle just hours before she took the debate stage against U.S. congressman Joe Cunningham in their race for the Palmetto State’s first congressional district.

Mace told Kinnard this act of vandalism was “most definitely … an intimidation tactic.”

Mount Pleasant police told Kinnard they are in the process of determining whether video evidence could help point them in the direction of the vandal – although the surveillance camera at the store where Mace was shopping was not functioning at the time.

Mace’s vehicle – a black 2011 Chevrolet Tahoe – is used by the candidate to ferry her two children to and from school. Her campaign manager said police were contacted “in the event (Mace) was followed” by a stalker.

To his credit, Cunningham condemned the vandalism.

“It does not matter who you support in this election, there is absolutely no place for this type of vandalism or animosity on either side,” Cunningham said in a statement. “I sincerely hope that whoever did this to Representative Mace’s car is found and held accountable.”

These Outdated Body Part Names Are No Longer Deemed Appropriate