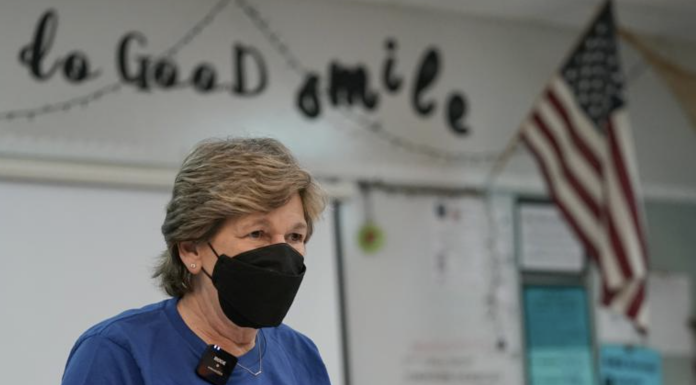 MISSION, Kan. (AP) — School board races, once sleepy and localized, have become the new front in a culture war raging across the nation as resentments over COVID-19 restrictions and anti-racism curriculum reach a boiling point.

On Tuesday, voters weigh in on dozens of races that have been dominated by debates over masks, vaccines, race and history. The outcomes will decide not just districts’ policies but also whether the education fight has staying power as part of the national discourse and becomes a rallying issue for Republicans in the 2022 midterms.

Conservatives have eagerly taken up the cause as they look to move past the coronavirus pandemic and to reframe the discussion on racial injustice in America as a rewriting of history.

The political tracking website Ballotpedia has identified 76 school districts in 22 states where candidates took a stance on race in education or critical race theory, which holds that racism is systemic in America’s institutions and which the National School Boards Association says is not taught in K-12 public schools.

1776 Action, a group inspired by former President Donald Trump’s now-disbanded 1776 Commission that played down America’s role in slavery, has been urging candidates to sign a pledge calling for the restoration of “honest, patriotic education.” At least 300 candidates and elected officials have done so, said Adam Waldeck, the group’s president.

“This will be the year that parents stand up and say, ‘You know, we have a voice, too.'”

“2021 is really going to sort of be seen as kind of a canary in the coal mine of what’s coming down the pike next year and into the future,” Waldeck said. “This will be the year that I think primarily parents stand up and say, ‘You know, we have a voice, too.’ And I think it’s going to be overwhelming.”

Board meetings have grown so contentious that they are being mocked in “Saturday Night Live” skits. Some board members have been called Nazis and child abusers. The National School Boards Association even likened some of what is happening to “domestic terrorism” before apologizing.

Randi Weingarten, president of the American Federation of Teachers, accused the right wing of orchestrating protests to “turn schools into battlegrounds with the goal of winning elections by politicizing both public health and history.”

She noted the Virginia governor’s race, in which Republican newcomer Glenn Youngkin has seized on conservatives’ frustrations with schools over pandemic policies and diversity education.

Even former Vice President Mike Pence has gotten into the game, taking a moment during a campaign rally in Ohio on Saturday to urge voters to support conservative school board candidates in Tuesday’s election.

Waldeck said his group also sent out mailers and targeted text messages in races in Johnston, Iowa, where three candidates have signed the pledge, and in West Chester, Pennsylvania, where law enforcement was called to investigate threats against school board president Chris McCune.

The backlash stems from his ordering the removal from a July meeting of a parent who kept demanding information about critical race theory after her two-minute time limit had ended. McCune, who is on the ballot, wrote in a letter to the Daily Local News newspaper in Pennsylvania that it is his duty to “maintain order” and insisted that the district doesn’t even teach critical race theory.

“National and local political forces continue to urge residents to rally against local school boards and CRT, even when board members and administrators have offered to meet to share the district’s curriculum to demonstrate that it is simply not what we teach,” he said.

The 1776 Project PAC, which is separate from 1776 Action and headed by New York political operative and author Ryan Girdusky, has invested in races across the country. It raised $289,544 in the third quarter, according to the latest report filed with the Federal Election Commission.

“I think anybody that’s running was probably to a degree tipped over by COVID,” said Jim McMullen, who is among three candidates the group is backing in the Blue Valley district in suburban Kansas City.

The former English teacher and father of five had considered running before the pandemic but finally decided to mount a bid after the district went virtual and hybrid for parts of last year.

In Colorado, Schumé Navarro, who is running for the Cherry Creek School District, went to court last month to win the right to go without a face covering at a district candidate event. The mother of five said she’s unable to wear a mask because of abuse she suffered as a child.

“The environment and the culture that it’s creating is just stealing from our kids,” she said of masks.

In Ohio, former state Republican chair Jane Timken has taken time from her campaign for the U.S. Senate to offer guidance and funding totaling more than $40,000 to more than 40 conservative candidates in hyperlocal school board races.

“We are helping them not just financially, but my team is knocking doors and making calls with them,” said Timken, who said she completed a critical race theory “listening tour” that exposed cases of children being “indoctrinated with leftist policies.”

In Wisconsin, voters in Mequon will decide whether to replace the majority of the Mequon-Thiensville school board. Amber Schroeder, an organizer of the Recall MTSD movement, said that along with slipping academic performance, parents are most concerned with critical race theory, which she sees as evident in the district’s emphasis on equity.

In Minnesota, Erin Shelton has joined two other conservative candidates on a “Vote for Three!” platform that denounces “harmful ideologies like CRT,” political indoctrination and “controversial medical mandates.” If all three are elected, they would hold an ideological majority on the board in Wayzata.

“I don’t believe that the way to academic excellence involves making any group of students feel like victims or any other feel responsible for that victimization,” Shelton said via email.

In Iowa, masking opponent Sarah Barthole received a high-profile endorsement from Republican Gov. Kim Reynolds as she runs for the school board of the Ankeny school district in suburban Des Moines. Barthole worked with Reynolds last year to reopen schools and is credited with inspiring the state’s now-blocked law prohibiting mask mandates in schools.

“The level of involvement in her campaign, I’ve never seen anything like it in a school board race before,” said Barthole’s treasurer, Steve Boal, whose own wife served on the board more than two decades ago. “Usually it’s kind of a pretty low-key thing.”

The governor’s backing in that race is just the beginning, predicted Tina Descovich, a co-founder of Moms for Liberty, a Melbourne, Florida-based group, whose 142 chapters in 35 states have fought vaccine and mask mandates.

“Our governor here in Florida has all but said he’s going to be involved in school board races,” said Descovich, who is a former member of the Brevard County School Board in Florida. “I’m curious to see what that looks like for 2022.”
___
Thompson reported from Buffalo, N.Y. Associated Press writer Julie Carr Smyth in Columbus, Ohio, contributed to this report.