China Just Accused The US Of Politicizing Virus Origins 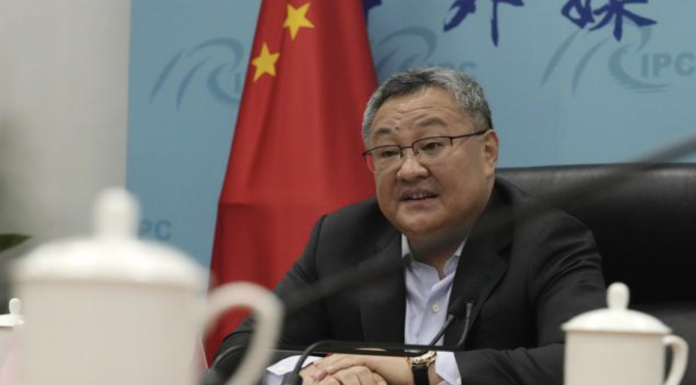 BEIJING (AP) — China went on the offensive ahead of the release of a U.S. intelligence report on the origins of the coronavirus, bringing out a senior official to accuse the United States of politicizing the issue by seeking to pin the blame on China.

Fu Cong, a director general in the Foreign Ministry, said at a briefing for foreign journalists that “scapegoating China cannot whitewash the U.S. If they want to baselessly accuse China, they better be prepared to accept the counterattack from China.”

China, the U.S, and the World Health Organization are entangled in a feud that centers on whether the virus that causes COVID-19 could have leaked from a lab in the city of Wuhan, where the disease was first detected in late 2019.

A joint WHO-China report this year concluded a lab leak was “extremely unlikely,” and China wants the investigation to move on to other possibilities.

The most likely scenario, the report said, is the virus jumped from bats to another animal that then infected humans.

But the findings are not conclusive. WHO Director-General Tedros Adhanom Ghebreyesus said in late March that “all hypotheses are on the table and warrant complete and further studies.”

HERE’S WHAT ELSE IS HAPPENING:

GENEVA — The World Health Organization says the number of new coronavirus cases reported globally appears to be stabilizing at about 4.5 million infections after steadily rising for the past two months.

In its weekly assessment of the pandemic, the U.N. health agency says COVID-19 increased by about 20% and 8% in the Western Pacific and in the Americas, while rates of disease either remained the same or dropped in other regions.

The countries with the highest numbers of new cases were the United States, Iran, India, Britain and Brazil. The assessment says there were about 68,000 new deaths reported globally, with Europe and the Americas registering increases of about 10%.

WHO also noted several recent studies show licensed vaccines still provide protection against severe coronavirus disease, but that there is some evidence to show the shots are less effective at preventing people from becoming infected with the more contagious delta variant.

Previous research concluded the vaccines are most useful for preventing hospitalizations and deaths.

LONDON — A music and surfing festival in southwest England has been linked to some 4,700 confirmed coronavirus cases.

About 76,000 people attended the Boardmasters festival event in Cornwall during August 11-15. Attendees were required either to be fully vaccinated against COVID-19, to provide a negative test within 24 hours of arrival, or show proof of immunity through past infection within the last six months.

A Boardmasters spokesperson said infection-prevention measures in place at the festival had gone beyond the government guidance.

Authorities in Cornwall, a tourism hot spot, asked visitors to stay away this week unless they had already booked a vacation. The county currently has the highest coronavirus infection rate in England.

Local authorities in Suffolk, England, also released an analysis of the more than 1,000 positive virus tests confirmed after the Latitude music festival in July, attended by around 40,000 people.

Council data showed 619 people contracted the virus during the event, while another 432 became infectious at the time, despite the event having the same entry requirements as the Boardmasters festival.

HANOI — The United States plans to provide an additional 1 million coronavirus vaccine doses and tens of millions of aid dollars to Vietnam to help combat the pandemic.

Vice President Kamala Harris, speaking during a bilateral meeting with Vietnamese Prime Minister Pham Minh Chinh on Wednesday, announced that the doses would begin to arrive within the next 24 hours. They will bring the total U.S. vaccine donation to Vietnam to 6 million doses.

The Defense Department is delivering 77 freezers for storing the vaccines throughout the country.

Vietnam is grappling with a fresh coronavirus surge driven by the delta variant, and the country has a stubbornly low vaccination rate.

In addition to more vaccine doses, the U.S. will provide $23 million in emergency aid through the Centers for Disease Control and the United States Agency for International Development to help expand distribution and access to vaccines, and to prepare for future disease threats.

ISLAMABAD — Pakistan reported 141 deaths from COVID-19 on Wednesday, one of its highest tallies since May.

According to Pakistan’s National Command and Operations Center, more than 4,000 new coronavirus infections were also reported in the past 24 hours.

The surge comes amid widespread violations of social distancing and new rules regarding vaccinations.

Pakistan announced Tuesday vaccinations will be required of teachers, professors, school staff and students older than 17 and unvaccinated people will be barred from entering educational institutions starting Oct. 15.

Unvaccinated people also will not be allowed to use public transport or enter shopping malls from Oct. 15.

Pakistan, with a population of about 220 million, has reported more than 1.1 million infections and 25,220 confirmed deaths in the pandemic.

The virus has shown no signs of slowing despite officials enforcing strong social distancing restrictions short of a lockdown in Seoul and other large population centers where private social gatherings are banned after 6 p.m.

The Health Ministry is concerned that transmissions could further increase during next month’s Chuseok holidays, the Korean version of Thanksgiving when millions of people travel across the country to meet relatives. It is considering measures to reduce travel during the period, such as limiting train occupancy.

New South Wales’s previous high for a 24-hour period was 830 infections reported Sunday.
Health Minister Brad Hazzard said Wednesday that the health system in Australia’s most populous state is under pressure but is coping.

The COVID-19 death toll has reached 76 in New South Wales since the outbreak of the delta variant was first detected in Sydney on June 16.
Neighboring Victoria, Australia second-most populous state, reported 45 new infections Wednesday. Both states are locked down.

JACKSON, Miss. — Mississippi’s top health official says he has received threats from people who are spreading lies accusing his family of receiving payments for him urging the public to get vaccinated against the coronavirus.

Mississippi has seen a rapid increase in cases since early July, driven by the highly contagious delta variant of the virus and the state’s low vaccination rate. State health officer Dr. Thomas Dobbs has been imploring people for months to get vaccinated.

On Tuesday, Dobbs wrote on Twitter that he has gotten threatening phone calls from people repeating unfounded “conspiracy theories” involving him and his family.

Dobbs says one lie is that his son, who is also a physician, receives a World Bank-funded kickback whenever Dobbs urges people to get vaccinated. In Dobbs’ words: “I get zero $ from promoting vaccination.”