CDC Chief: “Be Honest With Yourself” 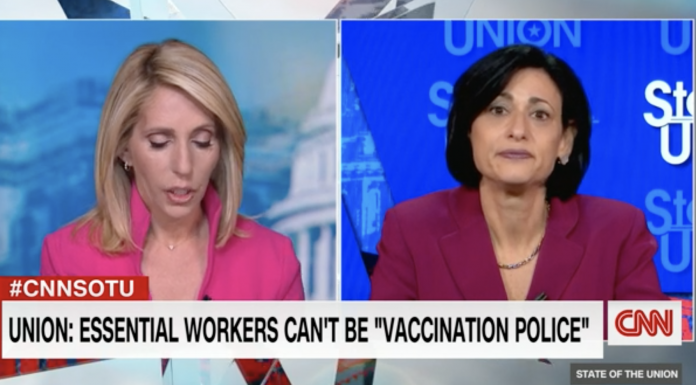 CDC chief on mask wearing: Unvaccinated people need to be honest with themselves | PLUS: Senators Warn of Eroding Trust in CDC

(CNN) Dr. Rochelle Walensky, director of the US Centers for Disease Control and Prevention, said Sunday that people have to be honest with themselves when deciding whether to wear a mask after the agency lifted masking requirements for vaccinated people.

The CDC last week updated its guidance for people fully vaccinated against Covid-19 to say they generally do not need to wear a mask, except in certain circumstances.

Some states, including California, are ending their mask mandates as they prepare to fully reopen.

“What we’re really asking in those settings, is to say, in terms of the honor system, people have to be honest with themselves,” Walensky said. “You’re protected if you’re vaccinated, you’re not if you’re not vaccinated.”

Everyone taking their masks off will be a slow process, she said, as not all communities are the same — with some having high levels of vaccinations and others still showing high case rates.

“I want to convey that we are not saying that everybody has to take off their mask if they’re vaccinated,” Walensky said.

“It’s been 16 months that we’ve been telling people to mask and this is going to be a slow process.”

The CDC director said in an interview on ABC’s “This Week” that the agency is asking people to take their health into their own hands … Click here to read more.

by Shannon Firth, Washington Correspondent, May 11, 2021

MedPage Today – Republican senators argued that Americans are losing faith in the CDC during a hearing of the Senate Health, Education, Labor, and Pensions Committee on Tuesday.

And two Republican committee members took aim at the NIH as well, arguing a link between the agency and a Chinese lab that Democrats characterized as a conspiracy theory.

“I used to have the utmost respect for the guidance from the CDC,” said Sen. Susan Collins (R-Maine). “I always considered the CDC to be the gold standard. I don’t anymore.”

In explaining her change of heart, Collins laid out examples of “conflicting, confusing guidance” that she felt undermined the public’s confidence in the agency.

She began with a report that the American Federation of Teachers had pressured the agency into making “verbatim” changes to draft guidance on school reopenings.

Second, she cited a New York Times article that argued the agency had overstated the risk of outdoor transmission with COVID-19, which CDC estimated was responsible for less than 10% of cases. “‘There is not a single documented COVID infection anywhere in the world from casual outdoor interactions, such as walking past someone on a street or eating at a nearby table,'” said Collins, reading aloud from the article.

Third, she pointed to experts’ evaluations of the CDC’s summer camp guidance, including a pediatric immunologist at Columbia University who characterized it as “senseless” and the editor-in chief of JAMA Pediatrics who called it “unfairly draconian.”