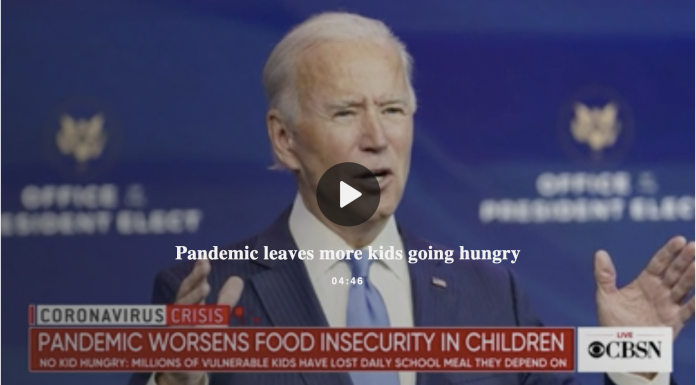 CBS NEWS – A Trump-era plan to cut food stamps is now off the table after the Biden administration said it is abandoning a previous plan to tighten work requirements for working-age adults without children.

Those restrictions were projected to deny federal food assistance benefits to 700,000 adults, a proposal that had drawn strong condemnation from anti-hunger advocates.

The U.S. Department of Agriculture on March 24 said it is withdrawing a Trump administration appeal of a federal court ruling.

The ruling had blocked the planned restrictions on the Supplemental Nutrition Assistance Program (SNAP), better known as food stamps.

Trump officials had filed the appeal in May, two months after the coronavirus pandemic had shuttered the economy and caused millions of people to lose their jobs.

Hunger and food insecurity around the U.S. have surged during the pandemic, with 41.4 million people enrolled in SNAP as of November, up 13% from February 2020 before the public health crisis, according to the latest data available from the USDA.

Despite that increase, the Trump administration had told CBS MoneyWatch last year that it believed imposing tighter restrictions on food stamps was “the right approach.”

USDA Secretary Tom Vilsack said the rule would have hurt some of the most at-risk adults during the ongoing crisis, such as rural Americans, people of color and those with less than a high school degree, who typically have a tougher time finding employment.

“The rule would have penalized individuals who were unable to find consistent income, when many low wage jobs have variable hours, and limited to no sick leave,” Vilsack said in a statement.

The restrictions on food stamps were pursued by former USDA Secretary Sonny Perdue, who had said that SNAP should provide “assistance through difficult times, not a way of life.”

But the Trump administration cuts were blocked by a federal court …