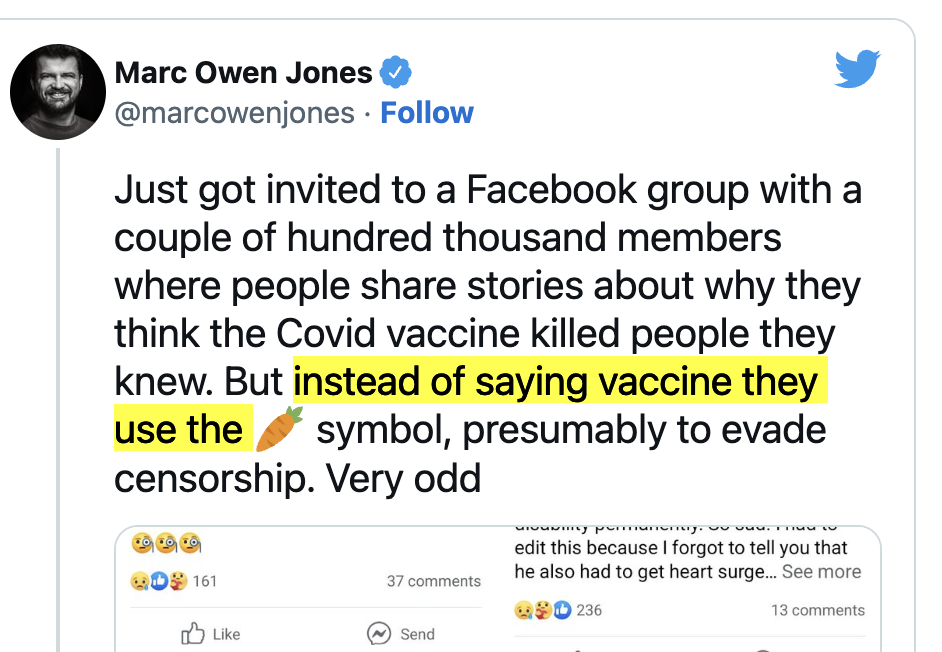 The BBC has seen several groups, one with hundreds of thousands of members, in which the emoji appears in place of the word “vaccine”.

Facebook’s algorithms tend to focus on words rather than images.

The groups are being used to share unverified claims of people being either injured or killed by vaccines.

Once the BBC alerted Facebook’s parent company, Meta, the groups were removed.

“We have removed this group for violating our harmful misinformation policies and will review any other similar content in line with this policy. We continue to work closely with public health experts and the UK government to further tackle Covid vaccine misinformation.” –  Facebook

However, the groups have since re-appeared in our searches.

One group we saw has been around for three years but rebranded itself to focus on vaccine stories, from being a group for sharing “banter, bets and funny videos” in August 2022.

The rules of the very large group state: “Use code words for everything”. It adds: “Do not use the c word, v word or b word ever” (covid, vaccine, booster). It was created more than a year ago and has more than 250,000 members.

Marc Owen-Jones, a disinformation researcher, and associate professor at Hamad Bin Khalifa University in Qatar, was invited to join it.

“It was people giving accounts of relatives who had died shortly after having the Covid-19 vaccine”, he said. “But instead of using the words “Covid-19” or “vaccine”, they were using emojis of carrots.

“Initially I was a little confused. And then it clicked – that it was being used as a way of evading, or apparently evading, Facebook’s fake news detection algorithms.”

Just got invited to a Facebook group with a couple of hundred thousand members where people share stories about why they think the Covid vaccine killed people they knew. But instead of saying vaccine they use the 🥕 symbol, presumably to evade censorship. Very odd pic.twitter.com/mvXBv1aXBX

An example of a Facebook group using the carrot emoji in place of the word or symbol for vaccine.