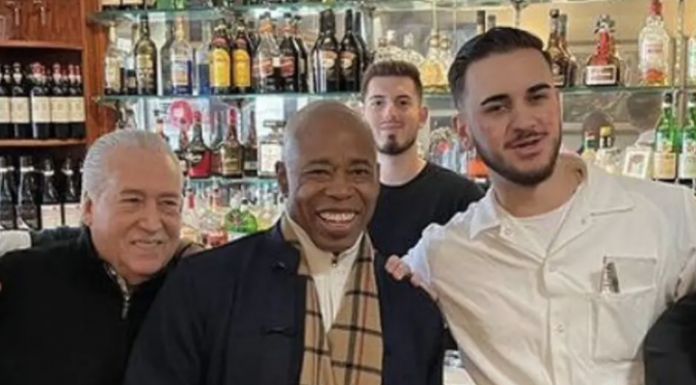 Fox News – New York City Mayor Eric Adams went maskless indoors days even though a statewide indoor mask mandate is in effect and the mayor requires the city’s school students to mask up.

Bronx Little Italy posted on Instagram with photos of the mayor and others without wearing face masks:

“Earlier today the Belmont [Business Improvement District] welcomed @nycmayor, NYC Council Members, @nycsmallbiz and @thenycalliance to Arthur Avenue to speak with our restaurateurs about the outdoor dining program and issues the industry is facing.”

The next morning, Adams announced, “We’re going to continue our mandates in schools.”

The state education department told The New York Post that masks were still required in schools because the Hochul administration had appealed the decision.

Rules Do Not Apply To Stacey Abrams Either, Apparently

(CNN) A since-deleted tweet featuring photos of a mask-less Stacey Abrams posing among masked schoolchildren has prompted swift backlash from political opponents who chastised the Georgia Democrat for what they describe as hypocritical behavior after she championed more stringent masking policies in schools.

The photos were originally tweeted Friday by the school’s principal, Holly Brookins, who wrote,

Abrams, a prominent Democratic organizer running for governor in Georgia, quote-tweeted the photos and thanked the principal for hosting her. Both tweets have since been deleted, and it appears as though Brookins’ account has also been deactivated.

The photos of the event at Glennwood Elementary School in Decatur, Georgia, prompted intense backlash from many who voiced frustration at masking policies — at a time when Covid-19 policies in schools have emerged as an intensely fraught issue in today’s politics.

The city extended its indoor masking requirement on January 18 through February 22, and the City Schools of Decatur enforce similar masking rules.

Glennwood officials did not respond immediately to a request for comment.

On Sunday, the Abrams campaign responded to the growing outrage, taking aim at her political opponents who have chastised her in response to the photos but failing to provide an explanation behind the widely circulated photos … read more.