Who Keeps Putting Russian Drugs In US Supplements? 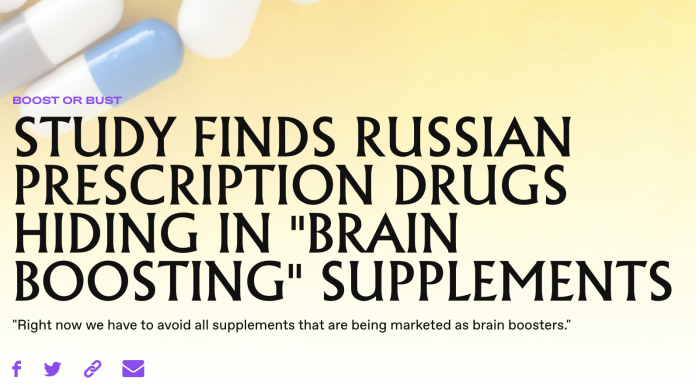 Inverse.com – THE PACKAGING OF SO-CALLED “BRAIN BOOSTING” SUPPLEMENTS typically promises buyers exciting results like mental clarity, enhanced creativity, and a razor sharp memory. What you actually get inside of that bottle, is likely to be something quite different.

For instance, it might include a drug licensed in Russia to treat traumatic brain injuries, or one used to treat stroke complications in Europe, according to new research.

An analysis published Wednesday in Neurology: Clinical Practice found that eight cognitive enhancement supplements and two workout supplements contained five potent drugs that are not approved by the Food and Drug Administration. These are supplements, sometimes referred to as nootropics, that are easy to purchase online.

These drugs are licensed in other countries, where they’ve been used to treat conditions ranging from the aftermath of a stroke to traumatic brain injuries. They include:

In the ten supplements the scientists studied, drugs like omberacetam, vinpocetine, and aniracetam were listed directly on the label, despite being illegal for use in supplements in the US.

In two of the supplements, phenibut and picamilon were present but not listed on the label – which means consumers would never know they were there.

The fact that these drugs were present in supplements isn’t exactly surprising to Pieter Cohen, the study’s first author and a general internist at Cambridge Health Alliance in Boston … Read more.