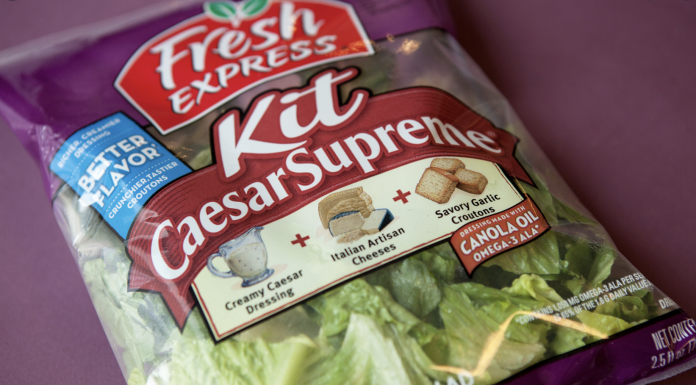 “Cyclospora is spread by people ingesting something—such as food or water—that was contaminated with feces (stool).”

Is it willful contamination or simply bad toilet habits again?

Food Safety News – The outbreak of parasitic infections linked to Fresh Express bagged salad mix has grown by 49 new laboratory-confirmed cases of Cyclospora, upping the total to 690 people, up from 641.

Laboratory-confirmed Cyclospora infections associated with this outbreak have been reported from 13 states:

The ill person from Georgia purchased and ate a bagged salad product while traveling in Missouri.

Of 680 people with available information, 37 people (5%) have been hospitalized. No deaths have been reported.

Illnesses might not yet be reported due to the time it takes between when a person becomes ill and when the illness is reported. This takes an average of 4 to 6 weeks.

If the number of cases reported by the CDC is different from the number reported by state or local health officials, data reported by local jurisdictions should be considered the most up to date. Any differences may be due to the timing of reporting and website updates.

As of July 8, 2020, there are 37 confirmed cases of Cyclospora illness linked to this outbreak in three Canadian provinces:

Individuals became sick between mid-May and mid-June 2020. One individual has been hospitalized.

No deaths have been reported. Individuals who became ill are between 21 and 70 years of age. The majority of cases (76%) are female.

Separately, the Food and Drug Administration’s (FDA’s) traceback investigation identified several farms in the U.S. that may have provided product used in the Fresh Express salads that were recalled. FDA investigated multiple farms identified in the traceback.

Given the emerging nature of genetic typing methodologies for this parasite, the FDA has been unable to determine if the Cyclospora detected in the canal is a genetic match to the clinical cases, therefore, there is currently not enough evidence to conclusively determine the cause of this outbreak.

Nevertheless, the current state of the investigation helps advance what we know about Cyclospora and offers important clues to inform future preventive measures.

In addition to the outbreak involving Fresh Express, CDC is also investigating a Cyclospora outbreak of domestically acquired cases. As of July 29, 2020, CDC reports 779 laboratory-confirmed cases of cyclosporiasis in 28 states by people who have no history of international travel for a 14-day period before illness onset.

Cyclospora is spread by people ingesting something—such as food or water—that was contaminated with feces (stool). Cyclospora needs time (typically, at least 1–2 weeks) after being passed in a bowel movement to become infectious for another person. Therefore, it is unlikely that Cyclospora is passed directly from one person to another. – CDC

Who Craps In Our Lettuce? FDA Can’t (Or Won’t) Say

Bagged Salads: A Bag Of Trouble

New Tech May Save Us All From Crapped-In Salad

Rodents, Frogs, Bats in Bagged Salads; Florida Has It Worst