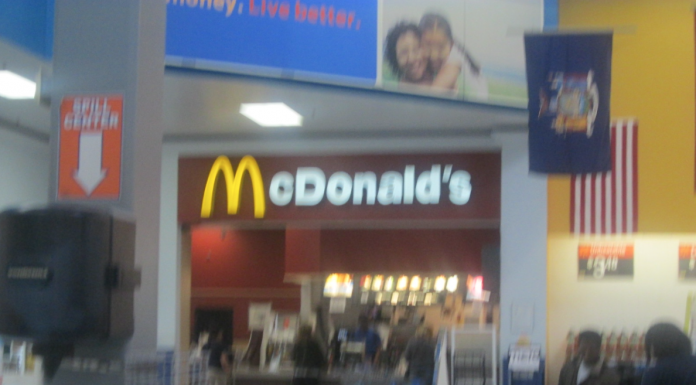 You'll Never See These 4 Things at Walmart Ever Again From burgers to pickup towers, things are changing at America's largest grocery chain.

EAT THIS, NOT THAT! – As summer rolls along, fewer and fewer reminders of the pandemic remain at supermarkets across the country.

Like other major retailers, Walmart has eased some of its COVID-19 restrictions, including its mask mandate and shorter store hours.

Much has changed in the past year at Walmart, and we’re starting to get our first glimpse of what the new “normal” could look like at America’s largest grocery chain.

There are several things that you won’t encounter while shopping at Walmart again, starting with McDonald’s.

McDonald’s restaurants began to disappear from inside Walmart stores well before the pandemic—more than a decade ago, to be exact.

Now, fewer of the burger eateries are left than ever. Only about 150 out of 875 locations will remain after the latest wave of closures, according to estimates.

McDonald’s to close hundreds of eateries inside Walmart stores

Happy Meals will soon get harder to find at Walmart.

This summer, hundreds of McDonald’s eateries located inside Walmart stores across the US are slated to close because of sluggish business — a trend that was accelerated by the pandemic.

The decades-old partnership between the largest restaurant chain and largest retailer in the world has been fraying for years. There were about 1,000 McDonald’s restaurants inside Walmart stores during their heyday, but by 2020 there were half as many McDonald’s stores, Walmart confirmed.

In July, McDonald’s said in its second quarter earnings report that it would be closing 200 restaurants in 2020 and that over half of them were at “lower sales volume” Walmart locations.

At the end of the summer just 150 McDonald’s stores will remain at Walmart, the retailer confirmed.

The accelerated pace of store closures was first reported by the Wall Street Journal … Click here to read more.