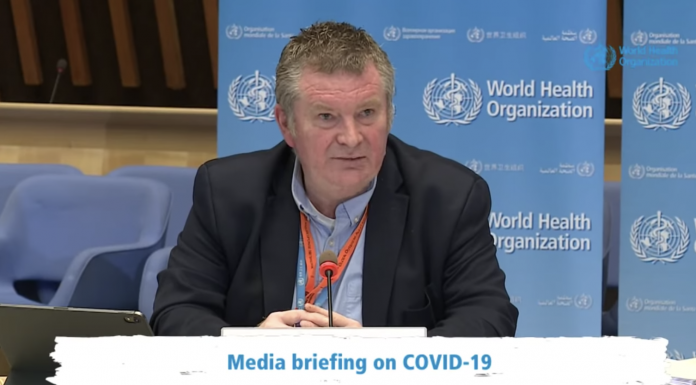 “State run media outlets in China swiftly seized on Ryan’s comments to cast doubt on the true origin of the virus.”

Breitbart – A senior World Health Organization (W.H.O.) expert on Monday declared that the novel coronavirus did not necessarily jump from animals into humans in Wuhan, China, where health officials detected the first clusters of the highly contagious and lethal disease.

The remarks by Dr. Michael Ryan, the executive director of the Health Emergencies Program at the China-influenced United Nations agency, came in response to a reporter asking about a two-person W.H.O. team who recently traveled to China to probe the origins of the Chinese coronavirus.

Tedros announced that the duo who visited China had “concluded their mission to lay the groundwork” for a more extensive “international team” to identify the virus’s origins.

“The team is actually not back yet, and we obviously haven’t had the chance to debrief them.”

Asked about the mission, Ryan said in responding:

“There are gaps in the epidemiological landscape and what is required is going to be a much more extensive retrospective epidemiological study to look at those first cases and clusters in Wuhan and to fully understand the links between those cases so that we can then determine at what point in Wuhan or elsewhere was the animal-human species barrier breached.

“Again, one must remember that there was a specific surveillance system in place in Wuhan for picking up clusters of atypical pneumonia.

State-run media outlets in China swiftly seized on Ryan’s comments to cast doubt on the true origin of the virus.

According to health officials, the virus may have originated in Wuhan wet markets, where animals known to transmit coronaviruses are crammed together in putrid conditions and sold for public consumption.

The Chinese city is also home to the Wuhan Institute of Virology (WIV), where researchers are known to carry out studies on bat coronaviruses … Read more.