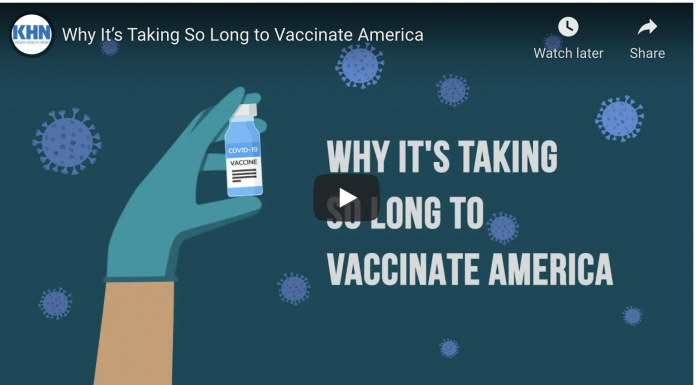 Why It’s Taking So Long to Vaccinate America

Kaiser Health News – To inoculate America against covid-19, vaccinators are facing unparalleled pressure in their race against the clock.

The country’s largest vaccination effort has gotten off to a rocky start for many reasons.

This KHN video reveals at least seven critical shortcomings in the nation’s vaccine rollout (see the complete list at bottom of story):

As the Vulnerable Wait, Some Political Leaders’ Spouses Get Covid Vaccines

Kaiser Health News – With supplies of covid-19 vaccines scarce, a federal advisory panel recommends first putting shots into the arms of health care workers, who keep the nation’s medical system running, and long-term care residents most likely to die from the coronavirus.

Nowhere on the list of prioritized recipients are public officials’ spouses.

The early vaccinations of political spouses spurred outrage on social media, with several Twitter users saying they should not be able to “jump the line” ahead of doctors, nurses and older people.

In most of the 29 states that responded to KHN inquiries of all 50 governors’ offices, top elected officials said they — and their spouses — will be vaccinated but have chosen to wait their turn behind more vulnerable constituents.

Some Congress members from both parties said much the same when they refused early doses offered in the name of keeping the government running. Those weren’t offered to their spouses.

Governors who got the shots along with their spouses, and the vice president’s office, said they wanted to set an example for residents, build trust, bridge ideological divides and show that the vaccine is safe and effective.

But that’s a rationale some critics don’t buy.

“It looks more like cutting in line than it does securing trust. The politicians can get the hospitals to give it to them under this illusion of building trust.

But it’s a façade,” said Arthur Caplan, a bioethics professor and founding head of the medical ethics division at New York University Grossman School of Medicine. “People might say: ‘Yup, typical rich people. They can’t be trusted.’ This undermines what they set out to do.”

Besides, Caplan said, the public doesn’t trust politicians all that much anyway, so inoculating celebrities, religious leaders or sports figures would likely do more to boost confidence in the vaccine.

Rock ’n’ roll king Elvis Presley famously got the polio vaccine in 1956 to help win over those who were skeptical; the actions of governors’ wives from that period are less remembered.

Dr. José Romero, chairperson of the Centers for Disease Control and Prevention’s Advisory Committee on Immunization Practices, said in an email to KHN that while his group provides an outline for distributing limited vaccine doses, “jurisdictions have the flexibility to do what’s appropriate for their population.” Kentucky and Texas officials pointed out that CDC Director Dr. Robert Redfield encouraged governors to publicly get the vaccine.

No one mentioned medical reasons for their spouses to get vaccines; hospitals are generally not vaccinating the spouses of medical professionals who have gotten the shot.

(It’s unclear whether vaccinated people can still spread the virus, so it’s possible that a vaccinated person could pass the virus to their spouse or have to quarantine if an unvaccinated spouse were to get covid.)

The office of West Virginia’s governor, Republican Jim Justice, released pictures of him, his wife, Cathy Justice, and other officials receiving shots. He also showed his own vaccination on YouTube.

Beshear’s office in Kentucky also released photos of him getting the vaccine in December on the same day as his wife, Britainy Beshear, and other state officials.

“There is no question that there is vaccine hesitancy out there,” Beshear said at a coronavirus briefing on Monday, the day former Kentucky governors and their spouses were vaccinated. He alluded to a future program involving faith leaders and others. “Validators are incredibly important to building that confidence.”

His father, Democratic former Gov. Steve Beshear, posted photos of his vaccination on his Facebook page, saying that he and his wife, Jane Beshear, along with other former Kentucky governors of both parties and their spouses, stepped up partly to show residents the vaccine is safe and encourage them to get it when it’s available to them.

Kentucky is currently in the first stage of vaccine distribution, which targets health care workers and residents of long-term care and assisted living facilities. Fewer than 15,000 of the 58,500 doses received for long-term care had been given out when the former governors and their spouses were vaccinated.

Tres Watson, a former communications director for the Republican Party of Kentucky who founded a political consulting firm, was skeptical about the intentions behind the event. He said it seemed to be a public relations effort created so the governor could vaccinate his parents.

Officials representing the Biden-Harris transition team and three other states where governors got vaccinated — Republican-led West Virginia and Texas, and Democratic-led Kansas — either didn’t respond to KHN or didn’t answer questions about spouses. Alabama’s Republican governor, Kay Ivey, got the vaccine and is divorced.

Politicians in other states have taken the opposite tack.

In Arkansas, Republican Gov. Asa Hutchinson is focused on ensuring high-priority groups such as health care workers, long-term care staffers and residents are vaccinated, said spokesperson LaConda Watson. “He and his wife will receive the vaccination when it’s their turn,” she said.

In Missouri, Kelli Jones, communications director for Republican Gov. Mike Parson, said in an email that he and the first lady fully intend to get the vaccine. Like governors from Colorado, Nevada and elsewhere, they’ve both recovered from covid-19, Jones said, and will “wait until their age group is eligible” under the state plan. Doctors recommend vaccinations even for people who have already had covid.

Cissy Sanders, 52, an events manager who lives in Austin, Texas, said she understands why lawmakers would need to get the vaccine.

Her own governor, Republican Greg Abbott, received it on live television to instill confidence, said his press secretary, Renae Eze, who wouldn’t address whether Abbott’s wife was vaccinated.

“Why is a non-high-risk group — i.e., these spouses — going before the most high-risk group? Who makes these decisions? Who thinks this is a good, responsible, safe decision to make?” she said. “Political spouses have not been at ground zero for the virus. Nursing home residents have been.”