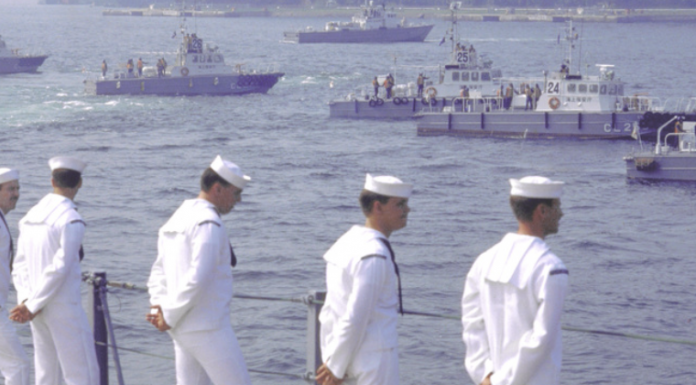 The U.S. Navy announced that it is preparing to discharge sailors who refuse vaccination for COVID-19.

KAISER HEALTH NEWS – The Navy said Thursday that those who don’t get an approved exemption by the deadline “will receive no lower than a general discharge under honorable conditions” and that “this type of discharge could result in the loss of some veterans’ benefits.”

The Navy said it may also seek recoupment of bonuses and the cost of training and education.

The U.S. Navy announced Thursday that it is preparing to discharge sailors who refuse vaccination for COVID-19 as mandated by the Pentagon, and the service members who get the boot over their noncompliance run the risk of losing some veterans benefits.

The Navy sent out a press release noting that Nov. 14 is the deadline for active-duty sailors to get either their second shot of a two-dose vaccine or the single shot of a one-dose vaccine. Reservists have until Dec. 14. (Dumas, 10/14)

In other news about vaccine mandates —

Axios: Maine Health Care Staff Won’t Get Unemployment Benefits If They Refuse Vaccine
Maine health care workers who face firing for defying COVID vaccine requirements will not be eligible to receive unemployment benefits, AP reports. The notice comes as Maine’s hospitals suffer labor shortages partly related to the state’s vaccine mandate. One of the state’s biggest hospitals has had to turn away trauma and pediatric patients and shutter an entire department, according to a local CBS affiliate. (Chen, 10/14)

AP: Vaccine Proof Or Negative Test Soon Required At Large Events
Starting Nov. 15, people in Washington state will need to either provide proof of COVID-19 vaccination or a negative test in order to attend large events, Gov. Jay Inslee announced Thursday. The new order — which Inslee’s staff said is modeled after similar policies in California and King County — applies to indoor events with 1,000 or more attendees and outdoor events that have more than 10,000 attendees. Events will be required to verify full vaccination status or a negative test within the last 72 hours for all attendees who are age 12 or older. (La Corte, 10/14)

Fox News: Texas AG Wins Stay Against San Antonio School District Vaccine Mandate
The Texas Supreme Court halted a coronavirus vaccine mandate for the San Antonio, Texas school district employees on Thursday hours before it was set to take effect. Texas’s highest court sided with Gov. Greg Abbott and Attorney General Ken Paxton by temporarily blocking the mandate but did not rule whether or not the district’s mandate or the governor’s vaccine mandate ban is legal, according to Texas Tribune. The mandate, which said that all employees of San Antonio Independent School District must be vaccinated by Friday, was a direct challenge to Abbott’s recent ban on vaccine mandates and was enacted in August by then-Superintendent Pedro Martinez prompting a lawsuit from Paxton. (Mark Miller, 10/14)

AP: Dozens Of US Nuclear Lab Workers Sue Over Vaccine Mandate
Workers at one of the nation’s premier nuclear weapons laboratories face a deadline Friday — be vaccinated or prepare to be fired. A total of 114 workers at Los Alamos National Laboratory — the birthplace of the atomic bomb — are suing over the mandate, saying exemptions have been unduly denied and their constitutional rights are being violated by Triad National Security LLC, the contractor that runs the lab for the U.S. Department of Energy. (Bryan, 10/14)

CNN: Up To Half Of Chicago Police Officers Face Unpaid Leave Over Vaccine Dispute
Up to half of Chicago’s rank-and-file police officers could be placed on unpaid leave because of a dispute between their union and Mayor Lori Lightfoot over a city requirement for officers to disclose their vaccine status. The dispute in Chicago is emblematic of tension across the country between unions and employers as cities and businesses seek to enforce vaccine mandates. At least 228 officers have died of Covid-19 this year, compared to 245 last year, according to the Officer Down Memorial Page. Covid is the leading cause of death for officers despite them being among the first groups having access to the vaccine at the end of last year. (Nickeas, 10/14)

KHN: KHN’s ‘What The Health?’: The Politics Of Vaccine Mandates
Should covid vaccines be mandated? The answer to that question has become predictably partisan, as with almost everything else associated with the pandemic. Even as the federal government prepares to issue rules requiring large employers to ensure their workers are vaccinated, GOP governors are trying to ban such mandates, leaving employers caught in the middle. (Rovner, 10/14)

In other news on the vaccine rollout —

USA Today: Biden Touts Vaccination Progress As Cases, Hospitalizations Drop
President Joe Biden on Thursday praised the country’s progress and vaccination efforts in fighting the COVID-19 pandemic as case and hospitalization rates continue to decline. “It’s working. We’re making progress,” Biden said in a White House address. Daily cases have declined 47% and hospitalizations are down 38% over the past six weeks, Biden said. Biden’s comments came a few hours before a federal advisory committee unanimously supported booster shots of the Moderna COVID-19 vaccine for people 65 and older, as well as younger adults with certain medical conditions or jobs that put them at increased risk for infection. The booster would be half the regular dose, given at least six months after the second shot. (Ortiz and Miller, 10/14)

AP: 226,000 Massachusetts Residents Have Received Booster Shots
The number of new daily cases of COVID-19 increased by more than 1,500 on Thursday, while the number of newly confirmed coronavirus deaths in Massachusetts rose by 14. The new numbers pushed the state’s confirmed COVID-19 death toll to 18,427 since the start of the pandemic, while its confirmed caseload rose to nearly 776,000. (10/14)