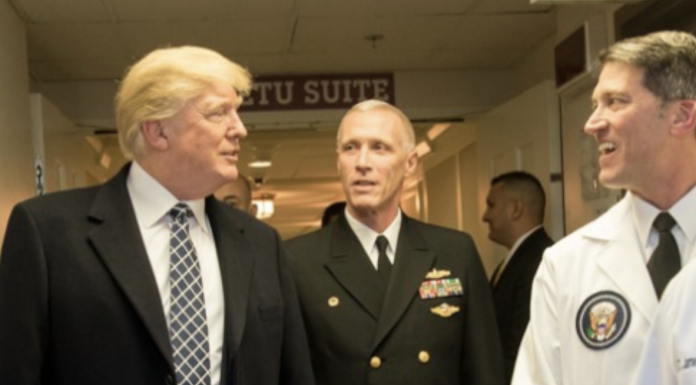 “I don’t wear a mask all that often, to be honest with you.” – Dr. Ronny Jackson

Politico – Dr. Ronny Jackson, a Republican congressional candidate in Texas and the former physician to the president, said Wednesday that Americans should not be required to wear masks to slow the spread of the coronavirus.

“I think that wearing a mask is a personal choice, and I don’t particularly want my government telling me that I have to wear a mask. And so I think that’s a choice that I can make,” Jackson told “Fox & Friends.”

The remarks from Jackson, a retired Navy rear admiral who served as the personal doctor for Presidents Barack Obama and Donald Trump, not only contradict the universal guidance of public health experts, but also undermine Texas Gov. Greg Abbott — who has mandated that most of his state’s residents wear a mask.

Amid a resurgence of coronavirus infections across the South and West, the Republican governor imposed a statewide mask order this month, demanding Texans in counties with more than 20 Covid-19 cases cover their faces when social distancing is not possible …

But Jackson argued Wednesday Americans should “look at your personal circumstances” and “look at your surroundings” to determine whether mask-wearing is “right for you.”

“I’m a firm believer that that’s, at this point, a personal choice,” he said. “And I encourage people, if they want to wear a mask, to wear a mask. But I don’t wear a mask all that often, to be honest with you.”

Jackson’s apparent aversion to masks underscores the extent to which they have become politicized during the public health crisis … Read more.