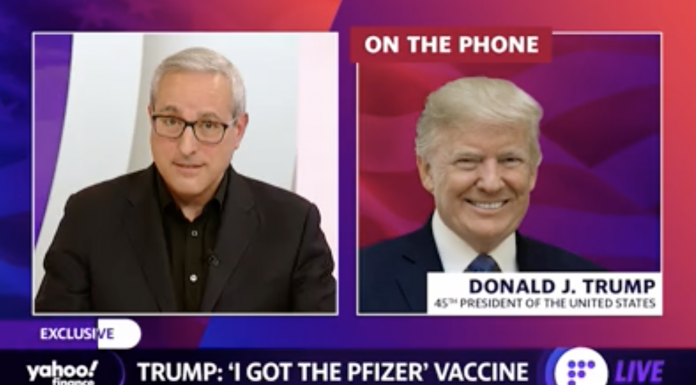 Donald Trump: 'I got the Pfizer' vaccine, leaves door open to getting booster shot

“Well, I got the Pfizer and I would have been very happy with any of them,” Trump told Yahoo Finance Live in a wide-ranging interview.

The Trump administration spent $18 billion dollars on Operation Warp Speed to develop and deliver multiple vaccine candidates from firms like Pfizer (PFE) Moderna (MRNA) and Johnson & Johnson (JNJ) although Pfizer developed its vaccine without any money from the U.S. government.

Trump contracted COVID last fall at the height of the 2020 presidential campaign.

“I had it, recovered from it pretty well. I don’t think I had it like the press, like the media said, you know, they would try to make it difficult,” the former president said. “It’s not pleasant, but I had it.”

“A CDC study showed unvaccinated people are more likely to die from COVID-19 … From June through July, the unvaccinated accounted for 82% of cases, 86% of hospitalizations, and 84% of deaths.”

He and his wife Melania, who also recovered from COVID last fall, received their vaccinations shortly before leaving Washington in January, but waited until last March to disclose that.

On Friday, deaths from COVID-19 in the United States topped 700,000, a grim milestone that makes the outbreak more deadly than the pandemics of 1918 and 1919.

“I thought it would have been gone long before now,” the former president told Yahoo Finance … READ MORE.