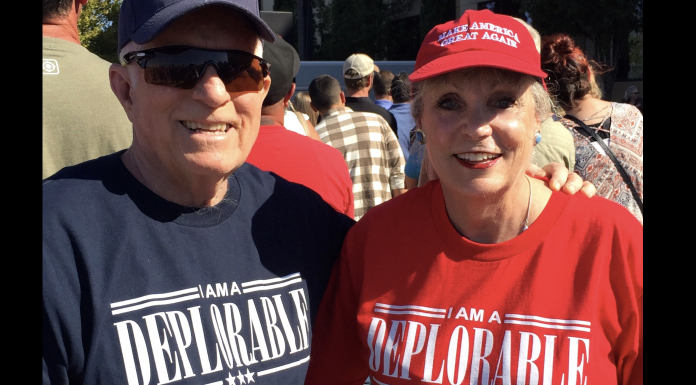 Liberty Headlines – Rick Frazier drove more than 750 miles from Ohio to Tulsa to be one of the first campers in line for President Donald Trump’s first rally in months, undeterred by a days-long wait in searing heat, the growing risk of coronavirus or a lukewarm reception from local officials.

The 64-year-old is among scores of supporters who have brought their vans, tents, campers and Trump flags to the parking lots and sidewalks outside the 19,000-seat BOK Center, and who say what matters most is being there to see the president take the stage on Saturday — and to be sure he knows they have his back.

“The big thing is to go in and support the president,” said Frazier, who arrived Tuesday for what will be his 21st Trump rally. Frazier said he feels safe, noting he and other campers are using hand sanitizer to prevent spread of COVID-19.

Trump rallies are known for being big events with a sometimes festival-like atmosphere, and have always drawn die-hard fans who sleep outside for days to secure a spot and pass time at a kind of political tailgate party.

The groups gathering in Tulsa are taking that loyalty to a new level, though some called the coronavirus threat “an exaggeration.”

Temperatures in Tulsa have reached the 90s, and the Trump faithful are camped in an area with hardly a spot of shade.

While Trump said Thursday he picked Oklahoma partly because “you’ve done so well with the COVID,” the city has seen record numbers of new coronavirus cases this week, and Tulsa Health Department Director Bruce Dart has pushed for postponing the event.

Even so, Trump said Thursday there had been “tremendous requests for tickets” and that there will be “a crowd like I guess nobody has seen before.”

His rallies typically include a lot of shouting and chanting, and attendees often travel from long distances, prompting fears they could be infected and then spread it to people back home. In an attempt to protect itself from lawsuits, Trump’s campaign added language to the event registration stating guests assumed risk for expose to COVID-19.

But Trump also was among the many who pointed out the hypocrisy of left-wingers, including those in the media, who had suddenly rediscovered their religion when it came to social-distancing after weeks of boisterously encouraging Black Lives Matter rallies.

Meeting with Trump at the White House Thursday, Oklahoma Gov. Kevin Stitt pledged the state is ready, noting its rate of positive COVID-19 tests is lower than many other states. As of this week, Tulsa County has displaced Oklahoma County as the state’s leading COVID-19 hotspot with 1,825 cases.

“It’s going to be safe,” said Stitt, a Republican. “We have to learn how to be safe and how to move on.”

Meanwhile, protesters have also begun gathering outside the Tulsa venue, where Trump had originally been scheduled to speak Friday.

He changed the date out of respect for those in the black community who objected to having it on Juneteenth, which marks the end of slavery in the U.S., and in a city where a 1921 white-on-black attack killed as many as 300 people.

With tensions still at their peak following the recent—and, in some cases, ongoing—race-riots, some of Tulsa’s black community leaders said they still worry Saturday’s rally could spark violence.

Trump has taken a hiatus from the rallies that have been a centerpiece of his campaign, halting them since March 2 because of the spreading virus. However, he has been eager to return to the events, which allow him to rally his base and build the campaign database of supporters.

Rainey Strader, 48, who traveled to Tulsa from Iowa with her husband and 75-year-old mother, said she brought a mask but isn’t sure if she will wear it once she gets inside the venue. Strader said she isn’t worried about COVID-19, which she considers to be “like the flu.”

“It’s just a new thing and everybody’s worried,” said Strader, who was working a word-search puzzle while she waited Thursday with her mother while her husband slept in their van. “It’s exaggerated.”

Strader’s mother, Catherine Pahsetopah, also said she’s not sure if she will wear her mask, despite being considered high-risk for COVID-19 because of her age and having health problems. She said she’s seen presidents come and go—all the way “back to Eisenhower”—and Trump ranks among the best.

“He’s great. He’s wonderful,” Pahsetopah said, adding that “If John Kennedy knew what happened to the Democratic Party he wouldn’t want them.”

Delmer Phillips, 41, of Tulsa described himself and others that showed up early for the rally as “front-row Joes” excited to get a glimpse of the president. He said he won’t wear a mask this weekend because he believes he may have already had the virus and has built up immunity.

“I’m personally not so worried about it,” he said. “I believe in God, and I don’t live in fear.”