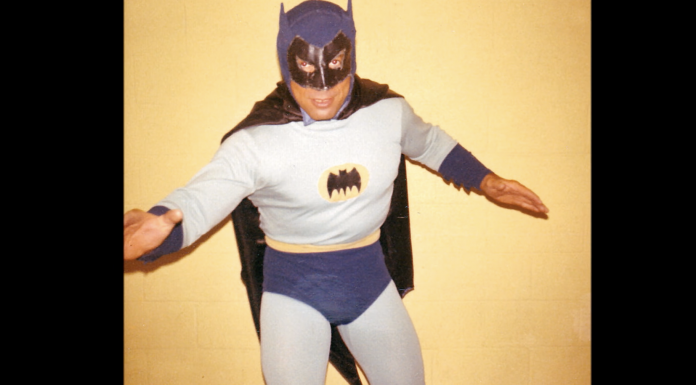 Legendary professional wrestler Tony Marino has died at the age of 90.

Early career (1954-1963) – Tony Silipini was born in 1931. He started wrestling in 1954 near his hometown of Rochester, NY. He wrestled under a number of names over the years in different areas of the country. In Australia, he was called Dino Lanza.

With the Batman craze sweeping the country in 1966, Marino created a wrestling version of the superhero. His custom outfits were created by Karl & Hildegarde’s of Columbus, Ohio. He debuted the persona in the Buffalo, NY area and had a smaller wrestler dressed as Robin.

Bruno Sammartino, who had purchased the promotional office in Pittsburgh, Pennsylvania, brought Marino into Pittsburgh as “Battman” and installed him as a major wrestler in the territory.

As The Battman, Marino became a fixture and very popular wrestler on Pittsburgh’s very popular Studio Wrestling TV show. By 1970 the Batman gimmick was phased out.

Teaming with Bruno Sammartino – He formed a tag team with WWWF World Heavyweight Champion Bruno Sammartino. Marino wrestled with a mask as “The Battman” on the Pittsburgh circuit.

Teaming with Victor Rivera and return to singles – On December 9, 1969, Tony teamed with Victor Rivera in Madison Square Garden, where they defeated International Tagteam Champions Professor Toru Tanaka and Mitsu Arakawa in 2 straight falls. Marino and Rivera were the tag champions for almost seven months.

Along the way, they scored wins over Killer Kowalski and Waldo Von Erich at Madison Square Garden, and Kowalski and Krippler Karl Kovacs at Sunnyside Gardens, Queens, NY.

On June 15, 1970, at Madison Square Garden, they lost their titles 2 falls to 1 to The Mongols, the team of Bepo Mongol and Geto Mongol. Both tagteams were undefeated up to that point. After the Battman gimmick was obsolete, Marino returned to jobbing. In a 1971 match against George The Animal Steele, Marino broke his leg. In 1972, Marino left the WWWF.

Marino had then notable feuds with The Stomper, Ben Justice and Killer Tim Brooks. In 1974, he formed a tag team with Bobo Brazil. They defeated Kurt Von Hess and Karl Von Shotz to win the Detroit titles. Marino got his third Detroit Tag Team Championship.

“Tony Marino left us this morning to go to a better place. I’ve enjoyed Tony’s company for many years, especially the last 6 months in the rehab facility, where we would visit almost every week. Tony was able to see his 90th birthday on April 20th. He was most humbled by his recent induction into the KWSA Hall of Fame. Tony will be sadly missed.”

Marino, born Tony Sipini, broke into the business in 1956 after a successful bodybuilding career. He wrestled all over the world, including runs in Australia, but in an era where over the top gimmicks were not the norm, he but may be best remembered for embracing the Batman-mania that swept the United States in the 1960s thanks to the legendary ABC Batman series starring Adam West and Burt Ward.

Rightly seeing the potential, Marino took on the nickname and mantle of the Dark Knight during a time period where such a thing could fall under the radar of copyright infringement, using the “Battman” spelling … Click here to read more.