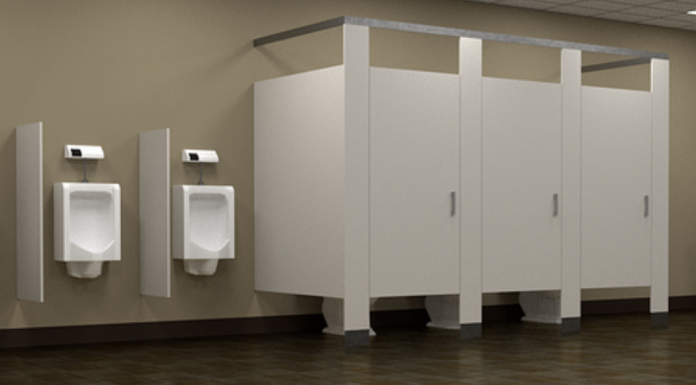 CTVNews.ca, EDMONTON – Though a public washroom isn’t typically the kind of place you want to spend a lot of time in, new research exploring COVID-19 transmission suggests you may not want to linger after flushing a public toilet.

A team of scientists from Florida Atlantic University’s College of Engineering and Computer Science conducted a series of tests investigating the spread of microbe-containing aerosol droplets generated from flushing a toilet or a urinal in a public restroom.

Using a particle counter to measure the size and number of droplets generated upon flushing, researchers found that the droplets were detected at heights of up to five feet (1.5 metres) for 20 seconds or longer after flushing.

Worse yet, researchers detected a smaller number of droplets in the air even when the toilet was flushed with a closed lid.

This suggests that aerosol droplets can escape through small gaps between the cover and the seat.

“After about three hours of tests involving more than 100 flushes, we found a substantial increase in the measured aerosol levels in the ambient environment with the total number of droplets generated in each flushing test ranging up to the tens of thousands.”

“Both the toilet and urinal generated large quantities of droplets smaller than three micrometers in size, posing a significant transmission risk if they contain infectious microorganisms. Due to their small size, these droplets can remain suspended for a long time.”

Though COVID-19 is typically spread through respiratory droplets produced when an infected person coughs, breathes or sneezes on another person, the study suggests that alternative routes of transmission – such as toilet flushing – may be possible given the discovery of small numbers of viruses in urine and stool samples.

Previous research and several wastewater monitoring programs across Canada have found traces of SARS-CoV-2, the virus that causes COVID-19, in wastewater … Click here to read more.

American Institute of Physics – Aerosolized droplets play a central role in the transmission of various infectious diseases, including Legionnaire’s disease, gastroenteritis-causing norovirus, and most recently COVID-19.

Respiratory droplets are known to be the most prominent source of transmission for COVID-19; however, alternative routes may exist given the discovery of small numbers of viable viruses in urine and stool samples.

Flushing biomatter can lead to the aerosolization of micro-organisms; thus, there is a likelihood that bioaerosols generated in public restrooms may pose a concern for the transmission of COVID-19, especially since these areas are relatively confined, experience heavy foot traffic, and may suffer from inadequate ventilation.

To quantify the extent of aerosolization, we measure the size and number of droplets generated by flushing toilets and urinals in a public restroom.

The results indicate that the particular designs tested in the study generate a large number of droplets in the size range 0.3μm–3μm, which can reach heights of at least 1.52 m.

Covering the toilet reduced aerosol levels but did not eliminate them completely, suggesting that aerosolized droplets escaped through small gaps between the cover and the seat.

In addition to consistent increases in aerosol levels immediately after flushing, there was a notable rise in ambient aerosol levels due to the accumulation of droplets from multiple flushes conducted during the tests.