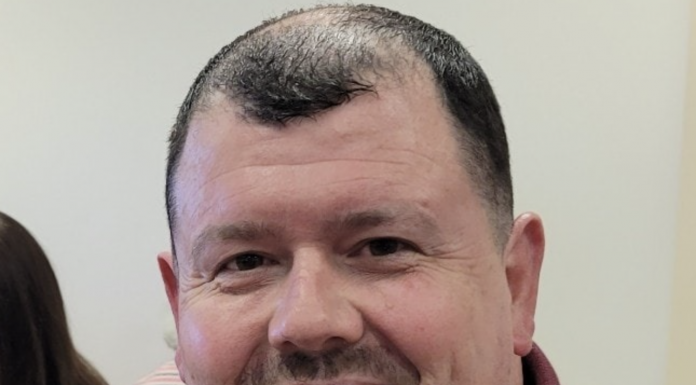 BUSINESS INSIDER – H. Scott Apley, a member of the State Republican Executive Committee in Texas, died with Covid in hospital on Wednesday morning.

He tested positive for COVID-19 on Sunday, according to a fundraising page set up to cover his medical bills and, later, his funeral expenses.

Apley was a new father, according to the page. His wife had also tested positive for the virus.

Five days before his death, Apley shared a meme on Facebook which questioned the usefulness of COVID-19 vaccines. The post was a screenshot of a tweet which read: 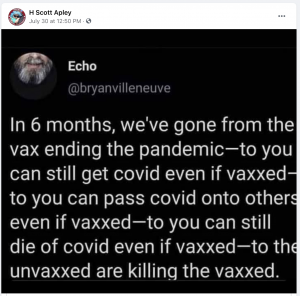 In May, he shared a link to an article that described how tickets and giveaways were being used to incentivize people to get vaccinated, and said:

Also in May he shared an invitation to a “mask burning” event at a pub in Cincinnati with a caption that read:

Heard on Morning Edition – The largest U.S. database for detecting events that might be vaccine side effects is being used by activists to spread disinformation about COVID-19 vaccines.

Known as the Vaccine Adverse Event Reporting System, or VAERS, the database includes hundreds of thousands of reports of health events that occurred minutes, hours or days after vaccination.

Many of the reported events are coincidental — things that happen by chance, not caused by the shot. But when millions of people are vaccinated within a short period, the total number of these reported events can look big.

Epidemiologists consider this database as only a starting point in the search for rare but potentially serious vaccine side effects. Far more work must be done before a cause-and-effect link can be determined between a reported health event and a vaccine.

“It’s a very valuable system for detecting adverse events, but it has to be used properly,” says William Moss, executive director of the International Vaccine Access Center at the Johns Hopkins Bloomberg School of Public Health. “And it’s ripe for misuse.”

The Most Popular J&J Vaccine Story On Facebook? A Conspiracy Theorist Posted It

In fact, VAERS has played a major role in the spread of misinformation about COVID-19 vaccines. The data is regularly appropriated by anti-vaccine advocates, who use the reports to claim falsely that COVID-19 vaccines are dangerous. They are aided by the fact that the entire VAERS database is public — it can be downloaded by anyone for any purpose.

“There’s very little control over what can be accessed and what can be manipulated,” says Melanie Smith, director of analysis at Graphika, a company that tracks vaccine misinformation online. She says that she sees VAERS data being shared across a wide variety of anti-vaccine social media channels. “I would say almost every mis- and disinformation story that we cover is accompanied by some set of VAERS data.”

VAERS was established decades ago, partly in direct response to the anti-vaccine movement. In 1982, a TV documentary called DPT Vaccine Roulette aired nationwide. It was filled with unsubstantiated claims that the vaccine given at the time against diphtheria, pertussis and tetanus could lead to intellectual and physical disability … READ MORE.