Our nonprofit was responsible for capturing 74% of them. Pit bulls and their mixes represent 63% of images collected in 2021.

Of the 27 cases with breed identification photographs, 48% (13) comprised images captured or republished by news media; 63% (17) comprised images located on social media pages of the dog’s owner or family members; and 74% (20) comprised images that were the result of DogsBite research and otherwise may have gone unpublished.

Police and animal control agencies only released images in 1 case, yet 80% of all deaths (41 of 51) involved dogs taken into quarantine.

(Percentages are higher than 100% due to a single death containing multiple photographs, each attributed to a different source, as well as images that fall into overlapping publishing categories.) 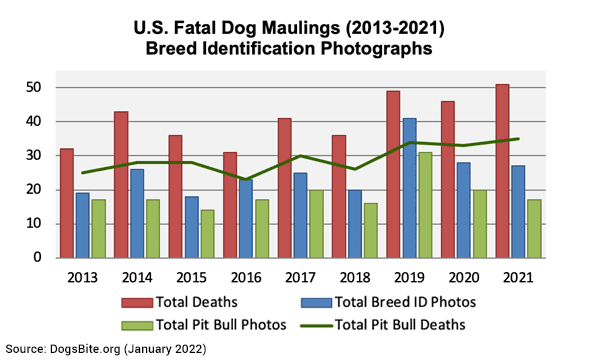 Chart shows 9 years of breed identification photograph collection between 2013 and 2021.

In 2021, there were several breed misidentification conflicts. After Tiffany Frangione was killed by her own dogs in her backyard, partially sourced media reports identified them as a “cane corso” and an “Alaskan husky-mix.” Those claims likely came from Frangione’s social media pages where she mislabeled her own dogs. “Rachirius,” a male, was also described by Frangione as a “bandog” and “rednose.” She described the female, “Masha,” as a “husky-golden retriever mix.”

After Leann Gratzer was killed by three dogs belonging to her daughter and her daughter’s roommate, the canines were identified as two male pit bulls and one female mixed-breed by Franklin County Sheriff Steve Pelton.

However, the daughter identified the female dog as “my baby girl” and “a red/brown pit” that took off in September “after a storm scared her” because she was not wearing her invisible fence electric collar. We designated this female dog a pit bull-mix.

In 2021, 53% of dog bite fatality cases had some form of a breed identification photograph, a fall from the 8-year average of 63% (2013 to 2020). Our nonprofit captured nearly three quarters of them in 2021, 74%, through our research efforts. Breed identification photographs captured by media groups jumped to 48% this year as well, a 92% increase from the first pandemic year of 2020, when media captured breed images fell to 25%, the lowest ever captured by news media.