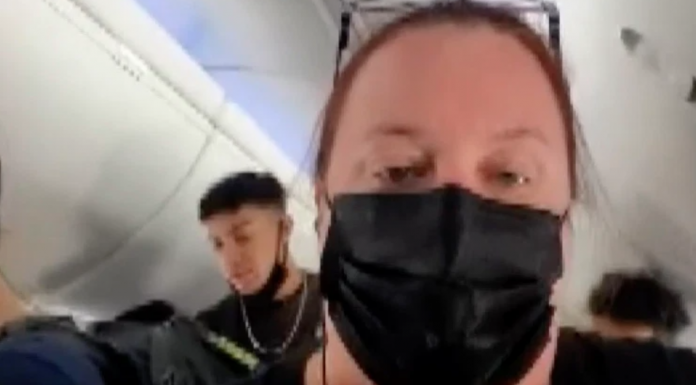 NY POST – What a bunch of maskholes. [Massachusetts residents are often referred to as ‘massholes’ by residents of neighboring states, typically in reference to their driving skills.]

A group of more than 30 teens from Boston refused to wear face masks on a plane to the Bahamas on Monday — forcing American Airlines to cancel the flight.

“It wasn’t all of them,” Banks recounted. “I would say 75 percent to 80 percent of them were being terrible kids, saying smart stuff.”

The flight was then canceled.

“All they had to do was follow the rules, put the mask on, sit there. No smart-mouth comments,” another ticked-off passenger Christina Randolph. “And they couldn’t do it.”

Adults stranded as a result of the shenanigans received hotel vouchers — but age rules for hotel bookings forced the teens to spend an uncomfortable night at the airport.

“Some people’s vacations are ruined. They were only going for a couple of nights. Now, they have to get rebooked,” added Stephanie Krzywanski … Click here to read more.

What To Know Before You Book Your Next Flight (Hint: The Rules Have Changed)

Laura Begley Bloom, Forbes – Air travel continues to soar, with more and more Americans getting vaccinated against Covid-19. The TSA says we’re back to pre-pandemic numbers.

Last Friday, U.S. airports screened a staggering two million people in a single day—which is the first time it’s been at that level since March 2020. And the TSA is preparing for a very busy summer travel season.

But here’s the thing: When it comes to flying, the rules have changed in many ways, so you can’t rely on things being the same. Here’s everything you need to know before you take your next flight.

Most of the deals are gone. All those deals we’ve been hearing about for the last year are a thing of the past. The reason? There are fewer flights, which means that there are fewer seats. That translates into higher prices.

The lesson here: Don’t wait around thinking that prices will go down. If you see a flight price that works for you, snag it.

Wondering where you’re going to get the best flight prices? “Don’t go where everyone else is going,” says Eric Zeugschmidt, a spokesperson for Delta Air Lines. The more people that are flying somewhere, the higher the prices. That said, more flights into a destination can sometimes result in better deals. (Think: New York City, Orlando, Las Vegas.)

When it comes to international destinations, airfare is generally cheaper the closer the destination is to the U.S., due to the cost of fuel. So in Europe, the cheapest flights are going to be to Portugal and Iceland.

Here’s another insider tip: Wednesdays are the slowest travel days and when you’re likely to get the best deal … Click here to read more.