Seafood From Asia? Throw It Back 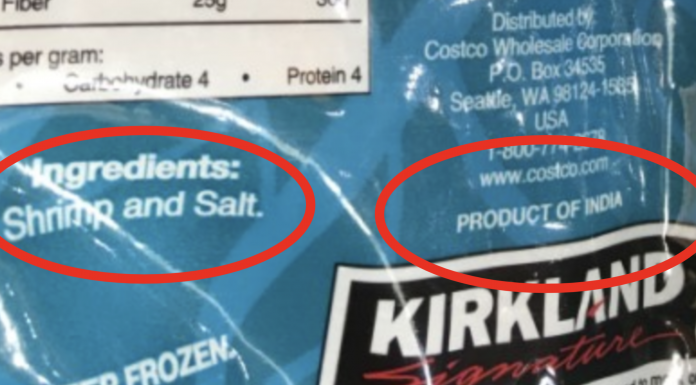 FOOD SAFETY NEWS – The company has not issued an expanded recall even though there have been additional patients identified in a Salmonella Weltevreden outbreak linked to shrimp from Avanti Frozen Foods of India.

As of this afternoon, new patients were identified after the Centers for Disease and Control and Prevention declared the outbreak over on July 21, according to an alert from the Food and Drug Administration. The alert said:

“The FDA, along with CDC and state and local partners, investigated a multistate outbreak of Salmonella Weltevreden infections linked to the consumption of frozen cooked shrimp manufactured by Avanti Frozen Foods of India,” “On July 21, the CDC announced that this outbreak was over.

“Since July 21, 2021, additional cases have been identified in this outbreak. At least one ill person consumed shrimp that are not a part of the current recall. Due to this new information, on August 10, 2021, the FDA asked the firm to expand its current recall to prevent additional illnesses. As of August 11, 2021, the firm has not initiated an expanded recall. FDA is continuing discussions with the firm and will provide more updates when available.”

Previously recalled shrimp should no longer be available for sale; however, these products have a long shelf life, and consumers, restaurants, and retailers should check their freezers and should throw away any recalled shrimp.

SEAFOOD IMPORTS FROM ASIA? WE TALKED ABOUT THIS …

Anyone who received recalled shrimp should use extra vigilance in cleaning and sanitizing any surfaces that may have come in contact with the recalled product, to reduce the risk of cross-contamination.

June 25, 2021 – A positive import sample combined with epidemiological and traceback evidence indicates that this outbreak is linked to frozen cooked shrimp manufactured by Avanti Frozen Foods. FDA’s traceback investigation identified a common shipment of shrimp that could have been consumed by ill people.

The product from this shipment was all sold thawed at retail and is no longer available for sale. Due to the potential for contamination with Salmonella, on June 25, 2021, Avanti Frozen Foods recalled certain frozen cooked, peeled, deveined shrimp products imported into the U.S. from December 2020 to February 2021.

Recalled shrimp were sold under various brand names and package sizes, including shrimp packaged with cocktail sauce. A full list of recalled brands and product information is available in the recall announcement.

The FDA is working with the firm to determine if there are additional shrimp that have been affected and should be recalled. Additional information will be provided as it becomes available.

On January 26, 2021, an imported sample of Avanti Frozen Foods shrimp was collected as a routine part of the FDA’s Imported Seafood Compliance Program. Analysis of the sample showed the presence of Salmonella Weltevreden. At the time, there were no known associated illnesses or closely related isolates of this strain.

In March 2021, as a result of the positive test, this shipment was refused admission into the U.S. and was destroyed, and the importing firm was added to Import Alert 16-81, which allows the FDA to detain products without physical examination due to the presence of Salmonella.

Based on purchase locations and purchase dates available for four ill people, FDA’s traceback investigation identified a common shipment of shrimp that could have been consumed by ill people. The product from this shipment was all sold thawed at retail. This thawed product is past expiration and no longer available for sale.