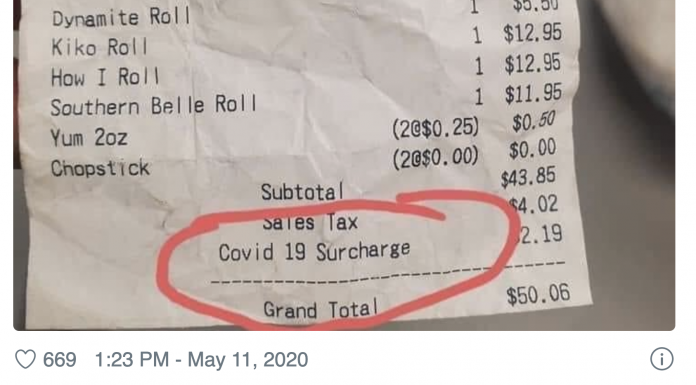 Fox News – A $2.19 coronavirus “surcharge” spotted in a receipt at a restaurant in Missouri started a backlash earlier this month, but the restaurateur who operates the establishment says he’s only trying to make ends meet.

Billy Yuzar previously told Fox News that he decided to add the surcharge to offset the rising costs of food from his suppliers, instead of raising menu across the board, with no explanation as to why.

He also said that his was just one of many restaurants in his West Plains town — all of whom use the same suppliers — to institute the charge.

He hasn’t heard any complaints from his customers, either.

Despite this, Yuzar says he’s been bombarded with negative reviews from people who haven’t ever visited the restaurant, and it all started with a tweet on social media, from a woman seemingly living in California.

“Scuse me … what? A covid surcharge…?” the Twitter user wrote in a post showing a receipt from the Kiko Japanese Steakhouse & Sushi Lounge that included a “covid 19 surcharge.”

But the West Plains restaurant isn’t the only establishment adding a little to the bill. As restaurants struggle to keep their doors open amid stay-at-home orders, some feel it’s a necessary addition.

In San Diego, a Mexican restaurant announced it was charging $1 extra for carne asada due to a meat shortage … Read more.

Are surcharges okay with you to cover personal protective equipment, cleaning supplies, increased food costs, and other COVID-19 expenses?

ALSO ON HEADLINE HEALTH TODAY: Trump May Lose FL Due To COVID-19: AP | Swimming Pool Noodle As PPE? | Can You Get COVID-19 Twice?