Residents Give NJ Guv An Earful Over Covid Rules 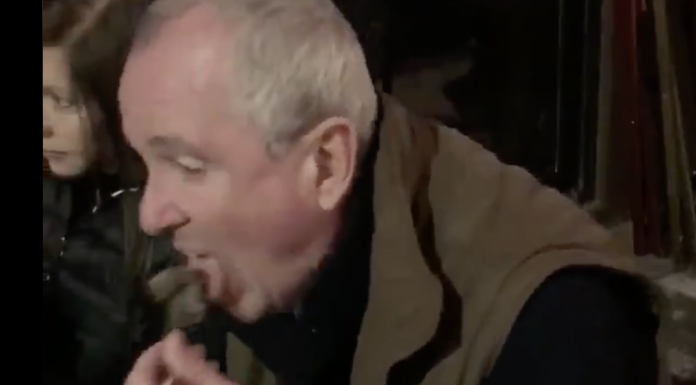 Fox News – New Jersey Gov. Phil Murphy was accosted by a group of people while he was eating dinner at a restaurant with his wife and four children, a video shared on social media shows.

The Democratic governor was seen on video sitting with his wife, Tammy; their three sons, and their daughter, when at least two women approached and confronted him, according to a video of the encounter.

Murphy and his family, who were not wearing masks at the time, were not only seated but eating at the time of the confrontation. He told reporters on Monday that he and his family were dining outdoors in Red Bank, N.J. during the Saturday night incident.

“Oh my God, Murphy, you are such a d—,” one woman reportedly tells him.

Tammy Murphy then whispers something in her husband’s ear as another woman cuts in.

“You havin’ fun with your family in the meantime you’re havin’ all kind of other bulls— goin’ on?” the woman says.

When one of the governor’s sons asks the woman if she’s drunk, she denies it. When he asks her if she can wear a mask, she responds: “You can go f— yourself, how’s that?”

“You know why I don’t need a mask?” the woman continues. “Because there ain’t nothin’ f—– wrong with me.”

As the conversation continues, Murphy places his mask over his face and his wife appears to begin recording the group.

When asked about the hecklers on Monday, Murphy said nothing had happened to prompt the two women to approach him. And the pair left after a third person from their group pushed them away.

He said during an unrelated press conference:

“I’m a big boy, I have thick skin. It doesn’t impact me at all and I think I can say the same thing for my wife,”

“I would say this though: our kids are not part of that … and I don’t even know who these people were, by the way.”

Murphy has faced backlash recently over his stringent novel coronavirus-related restrictions and limitations as the holidays approach.

Just last week, Town of Howell Police Chief Andrew Kudrick said his department “will not accept nor respond to any report of a facial covering/mask, social distancing or indoor/outdoor gathering complaint” … Read more.

How Covid-19 Made This Governor The USA’s Most Powerful