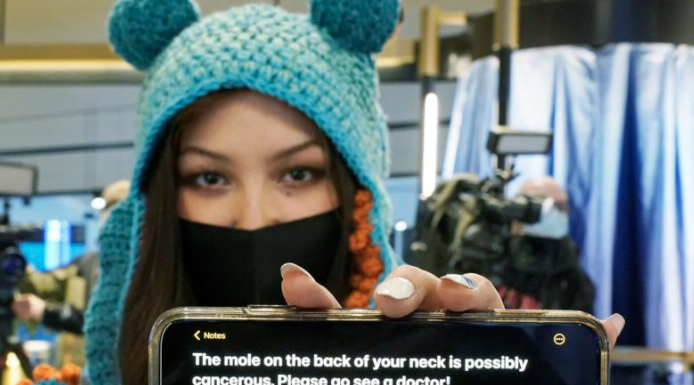 SEATTLE (AP) — Brian “Red” Hamilton was in the middle of moving equipment on the Vancouver Canucks’ bench in between periods on Oct. 23 in Seattle when he noticed a woman behind the bench pressing her phone against the plexiglass.

The message on her phone was written in a large font and caught the attention of Hamilton, the assistant equipment manager for the Canucks. The message expressed Nadia Popovici’s concern that she believed a mole on the back of Hamilton’s neck was cancerous and that he needed to get it checked.

It turned out she was right.

“I felt bad at the moment because I’m walking off the bench and she put her phone up to the glass and on the phone it said the mole on the back of your neck is cancer. And it threw me off,” Hamilton recalled on Saturday before the Canucks played their second game of the season in Seattle.

“So I kind of just shrugged and kept going. My initial response when I found out was I felt bad because I felt like I didn’t really give her the time of day. I’m excited that she knows because she needs to know.”

The Canucks posted a letter from Hamilton on Saturday retelling the story of how all this played out and expressing his thanks and desire to meet the woman in question.

Within barely an hour, both the Canucks and Seattle Kraken said the 22-year-old Popovici had been contacted after spending New Year’s Eve working at a crisis hotline. The pair were able to meet about 90 minutes before the Kraken and Canucks played on Saturday night.

“The fact that I got to look him in the eye and hear what happened from his perspective,” said Popovici, who graduated from the University of Washington and intends to attend medical school in the next year.

“Imagine how jarring that is to for you to be at work and someone just kind of looks at you and says, ‘Hey, maybe you go see a doctor.’ That’s not what you want to hear. So the fact that I got to see him and talk to his family members that have been really impacted by him dodging a big bullet that’s so special.”

The Kraken acknowledged the story of what happened midway through the first period to a standing ovation from the crowd and announced both franchises would be giving Popovici a joint gift of $10,000 to help with her medical school expenses.

Hamilton has been with the Canucks for nearly 20 years, starting with the team in 2002. Amid the chaos that happens around the bench of an NHL game, Hamilton said he was amazed Popovici was able to even notice a mole he had no idea existed.

“How she saw it boggles my mind,” Hamilton said. “It wasn’t very big. I wear a jacket. I wear a radio on the back of my jacket that hooks on so the cords are there.”

Popovici said she’s done a lot of volunteer work in hospitals including a stint helping in an oncology ward.

“I saw his and I was like, wow, that is a picture perfect example of what a melanoma looks like,” Popovici said.

The game in Seattle in October was the final stop on the Canucks’ opening road trip. Within a couple days of being back in Vancouver, Hamilton had team doctors look at the mole in question. When they expressed concern, Hamilton had it removed a few days later and sent off to be biopsied.

The biopsy results came back showing there were cancerous cells in the mole. A larger area of skin around the mole was then removed to be examined and Hamilton said that came back negative.

Hamilton was told by his doctors the cancer in the mole could have become life-threatening in a few years if it had not been addressed.

Hamilton said the entire purpose of telling his story and releasing the letter was to give Popovici recognition for her effort in getting his attention and writing the message.