Proud Boys Show Up At School Board Meeting, It Gets Ugly Fast 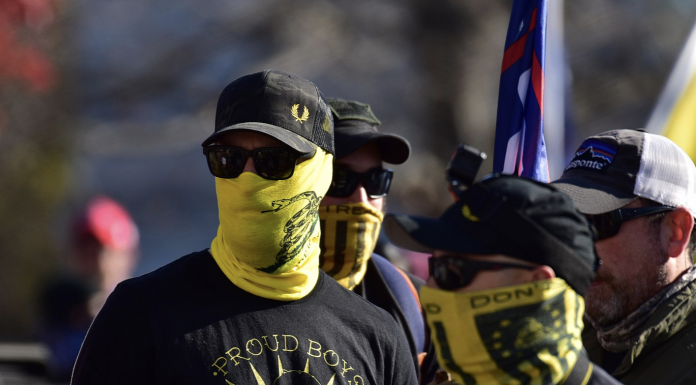 BOSTON GLOBE – The Nashua (N.H.) Board of Education had barely begun its meeting on Oct. 5 when the disruptions began.

One man challenged a requirement that all attendees wear masks. They cause pneumonia and bacterial infections, he said.

Soon afterward, a woman in the audience was asked to leave when she railed against the policy, which also requires that all Nashua students wear masks in school.

Two police officers, stationed just outside the room, watched warily as the woman shouted at board president Heather Raymond.

“You’re a child killer and a child abuser!” the woman said loudly as she exited. Raymond adjourned the meeting after only five minutes, according to a video of the session.

The ruckus in Nashua, where members of the far-right Proud Boys and neo-Nazis have attended previous meetings, is not an isolated occurrence.

The business of local and state government in New Hampshire is under increasing strain as antigovernment activists — including foes of COVID-19 vaccinations, mask mandates, and even federal grants to fight the virus — have turned traditionally quiet meetings into ugly shouting matches.

“It’s really awful, frankly,” said Raymond, who also asked fellow board member Paula Johnson to leave the Oct. 5 meeting because she refused to wear a mask.

Another board member, Gloria Timmons, said she has received alarming threats via social media after she supported the masking policy.

One, from Aug. 21, warned: “No communist or socialist should be allowed ANY place in ANY government, but should be hunted down and exterminated along with their followers, just to be sure.”

Timmons, who is Black, is a disabled Army veteran and former president of the Greater Nashua branch of the NAACP.

The protesters had urged the council, which shares authority with the governor to administer state affairs, to reject $27 million in federal money to support the state’s vaccination effort. The Republican-dominated board complied with a 4-1 vote along party lines … READ MORE.