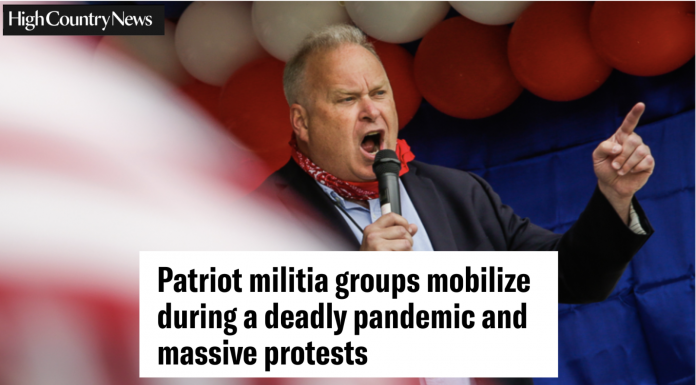 High Country News – In the first weeks of June, as protests against police brutality spread across the country, a group of people who were neither demonstrators nor law enforcement began to appear in the streets.

These members of the Patriot militia movement — an assortment of groups defined by anti-government, pro-gun, and conspiracy-driven ideologies — watched from the sidelines, kitted out in bulletproof vests and camouflage and armed with semi-automatic rifles.

By mid-June, there had been 136 instances of paramilitary, far-right, and armed militia groups or individuals attending anti-police violence protests nationwide, according to Political Research Associates, a social justice think tank.

“[Rep. Jim] Walsh, the two-term Aberdeen [Wash.] Republican incumbent, pledged to keep fighting for the traditional values and industries of Southwest Washington and against the ‘BMW communists’ who are pushing radical agendas in the state. He laid much of the blame for Washington’s $9 Bil. COVID-19 related budget shortfall at the feet of Gov. Jay Inslee and his lockdown orders.”  – High Country News, July 15, 2020

In Oakdale, California, rumors of a Black Lives Matter protest drew members of the California State Militia but few others.

In Olympia, Washington, members of the Washington State Three Percent guarded businesses, at, they said, the owners’ request, posing for a photo with a police officer. (The police department later launched an investigation into the incident.)

The protests and concurrent pandemic have proven a boon to extremist groups looking to increase their visibility.

During the early stages of the coronavirus outbreak, Patriot militia members — particularly those in the Three Percent — mobilized around food drives and “reopen” rallies.

Then, as protests against police violence spread, Three Percenters and other Patriot militia groups positioned themselves as guardians of private property and free speech.

“Civilians have legal authority to use firearms for self-protection, not vigilante justice. It is the job and responsibility of the police to enforce the laws and protect the city from looting or violence.” – Mayor Shelby Rognstad, Sandpoint, Idaho

The leadership vacuum left by state and federal authorities in recent months offered the groups an opening, allowing them to accrue clout, provide services in lieu of government action and build political influence.