“We’re in an explosive period for precious metals markets … ”

BEIJING (AP) — The price of gold surged to a record above $1,934 per ounce on Monday as investors moved money into an asset seen as a safe haven amid jitters about U.S.-Chinese tension and the recovery from the coronavirus pandemic.

Prices of gold and silver have jumped as rising infection numbers and job losses in the United States and some other economies fuel concern the recovery from the virus and the worst global downturn since the 1930s might be faltering.

Precious metals, along with bonds, often are seen as stores of value when financial markets decline. Forecasters watch their prices as an indicator of how investors see the economic future. 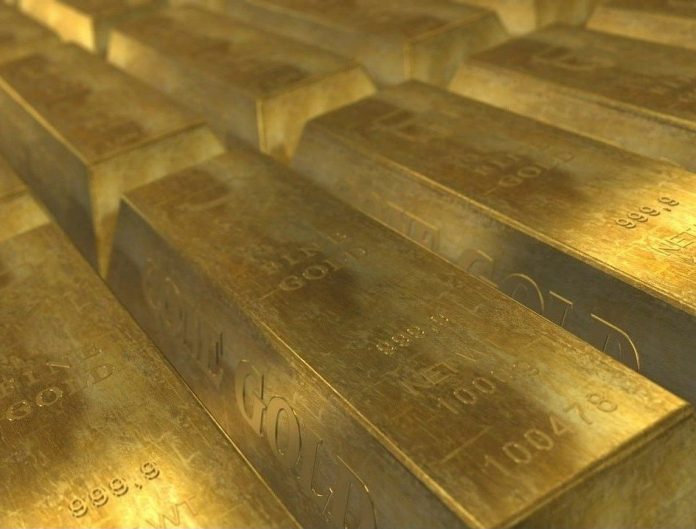 (Money Metals Exchange) There’s no doubt about it now. We’re in an explosive period for precious metals markets, so let’s get right to this week’s price action.

Gold prices surged to $1,900 an ounce on Thursday before finishing the day slightly below that key level. As of this Friday, gold is back above that mark and currently checks in at $1,910 – up 5.1% for the week.

Gold could hit a new record high as early as today now. However, it wouldn’t necessarily be a bad thing if the market first pulled back a bit and established a base for its launch to $2,000 and above.

A negative divergence took place yesterday in the gold mining stocks, which fell a couple percent as a group. That may suggest some corrective action ahead in the gold market.

But on a long-term basis neither the miners nor gold itself appear to be anywhere near major bull market tops.

As long as the U.S. Congress and Federal Reserve keep pumping stimulus dollars into a moribund economy, upward pressure on gold will likely persist. Another stimulus package is coming with $1,200 checks for most Americans and hundreds of billions of dollars for various other programs.
It will all be financed with more debt – and, ultimately, with fiat currency created out of thin air.

Successful American capitalist and past Money Metals podcast guest Steve Forbes warned on Thursday that the gold market may be anticipating a “category 5 economic hurricane” ahead:

When gold moves up, smart investors pay attention. The yellow metal today is up about 60% where it was two years ago. It has jumped smartly in recent days. The surge is a warning. The Federal Reserve, America’s central bank, is starting to create too much money. And if this continues, we’ll face a serious financial and economic crisis, perhaps as soon as next year.

Of course, whether we get into serious trouble will depend heavily on economic policy in Washington. If after the elections, we get a tsunami of new taxes and regulations, the economy will falter and our central bank will respond with an eruption of new money printing. But monetary policy can’t overcome a rip of higher taxes and crushing burdens on businesses. In this situation, the dollar will teeter and we’ll undergo a category five economic hurricane.

Well, if it’s been a big week for gold, it’s been an even bigger week for silver. The white metal broke above $20 an ounce on Monday and spiked all the way up to $23 by Wednesday. Prices currently trade at $22.79 per ounce after gaining an extraordinary 16.7% or over $3.00 an ounce this week alone.

What’s behind the huge move in silver prices?

For one thing, the round number breakout to multi-year highs induced a wave of short covering. Leveraged futures traders who had made bearish bets against silver were forced to cut their losses by buying back their short positions.

For another, demand for physical silver is set to rise at a time when mining supply is constricted.

Silver is used in a wide range of high-tech and industrial applications. One of the fastest growing sources of silver demand is in solar panels and other so-called “green” technologies.

The European Union’s recovery fund allocates a huge chunk of its spending to environmental initiatives and alternative energy development. The EU may issue “green bonds” to help boost investment in wind and solar farms and other projects.

It’s no coincidence that two of the best performing niche sub-sectors this year are solar energy and silver mining. Solar panels as well as the batteries needed to store power at night require a number of specialty metals, including silver.

Investors are seeing opportunity in every stage of solar energy deployment, from the raw materials that go into it to the companies that sell rooftop panels to consumers.

The hottest high-profile stock of 2020 is Tesla. Its shares have more than tripled in value this year. Elon Musk’s electric car company is now worth multiples of some conventional car markers despite having less revenue.

Tesla’s sky-high valuation has left many Wall Street analysts scratching their heads. But perhaps Tesla investors aren’t eyeing vehicle sales as much as they are seeing massive growth potential in Tesla’s solar panel and battery businesses.

In the years ahead, residential solar arrays could become ubiquitous as relative cost efficiencies improve while government incentives and mandates expand. One way to play this trend without buying expensive stocks or speculating on up-and-coming players within the solar industry is to buy physical silver.

The upshot is that since silver is also a precious metal, it is also valued for its monetary properties. Silver could appreciate hugely during an economic crisis, currency crisis, or political crisis that creates a difficult business environment even for mining companies.

ALSO ON HEADLINE HEALTH TODAY: ‘What Does Ghislaine Maxwell Have On Trump?’ | ARRESTED For Not Wearing A Mask? | Guv: Chicken Wings Don’t Count As Food