“Deranged Individuals With Cellphones Snitching On Everyone” 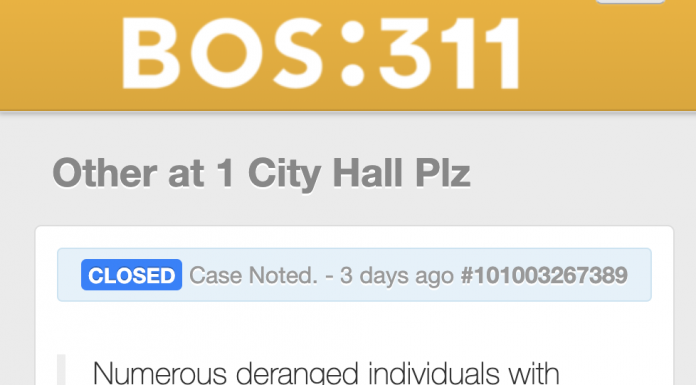 “South Boston … has continued to serve as a hot spot for various forms of knuckleheads.”

Boston Globe – After nearly two months of imposed isolation, and with temperatures finally swelling into the 70s, the past weekend seemed to make official what most of us have long known:

Quarantine fatigue has set in — at least among some of us.

The warm weekend weather drew crowds around Boston, and those crowds quickly drew ire. Residents — apparently frustrated with neighbors and visitors not following social distancing guidelines or wearing masks in public — flooded the BOS:311 system with complaints and calls for stricter enforcement of the recommendations aimed at stopping the spread of the novel coronavirus.

[“BOS:311 – 311 is an easy-to-remember telephone number that connects you with highly-trained Constituent Service Center representatives who are ready to help you with requests for non-emergency City services and information.” – boston.gov]

“Lots of people sitting on benches near others, sunbathing and breaking social distancing rules at constitution beach,” one person wrote in a complaint lodged Sunday, when temperatures reached the mid-70s. “Please block off benches to remind people they shouldn’t be socializing at this time.”

Frustrations with those who have declined to practice proper social distancing measures have existed, in some form, since the measures were first implemented back in March, as some so-called social-distancing vigilantes have sought to ensure public safety by reminding neighbors themselves.

But nearly two months into a statewide shutdown, those frustrations seem to be bubbling over as spring’s arrival has propelled countless residents from their homes and toward the city’s parks and beaches.

South Boston, for instance, which emerged as a target of national scorn when photos of young people packing bars went viral over Saint Patrick’s Day weekend, has continued to serve as a hot spot for various forms of knuckleheadism.

The neighborhood, filled with young professionals drawn to the area’s plethora of trendy bars and restaurants, was the site of a number of alleged offenses over the weekend, from packed roof parties to public drinking.

“Yuppie privilege is overriding the mayors social distancing rule,” read a complaint filed to Boston’s 311 system. “Close the beaches and start arresting for public solo cup booze drinking. Yuppies walking around all day with cups full of alcohol being sloppy … ”

“Numerous deranged individuals with cellphones snitching on everyone,” the person wrote in their own report … Read more.