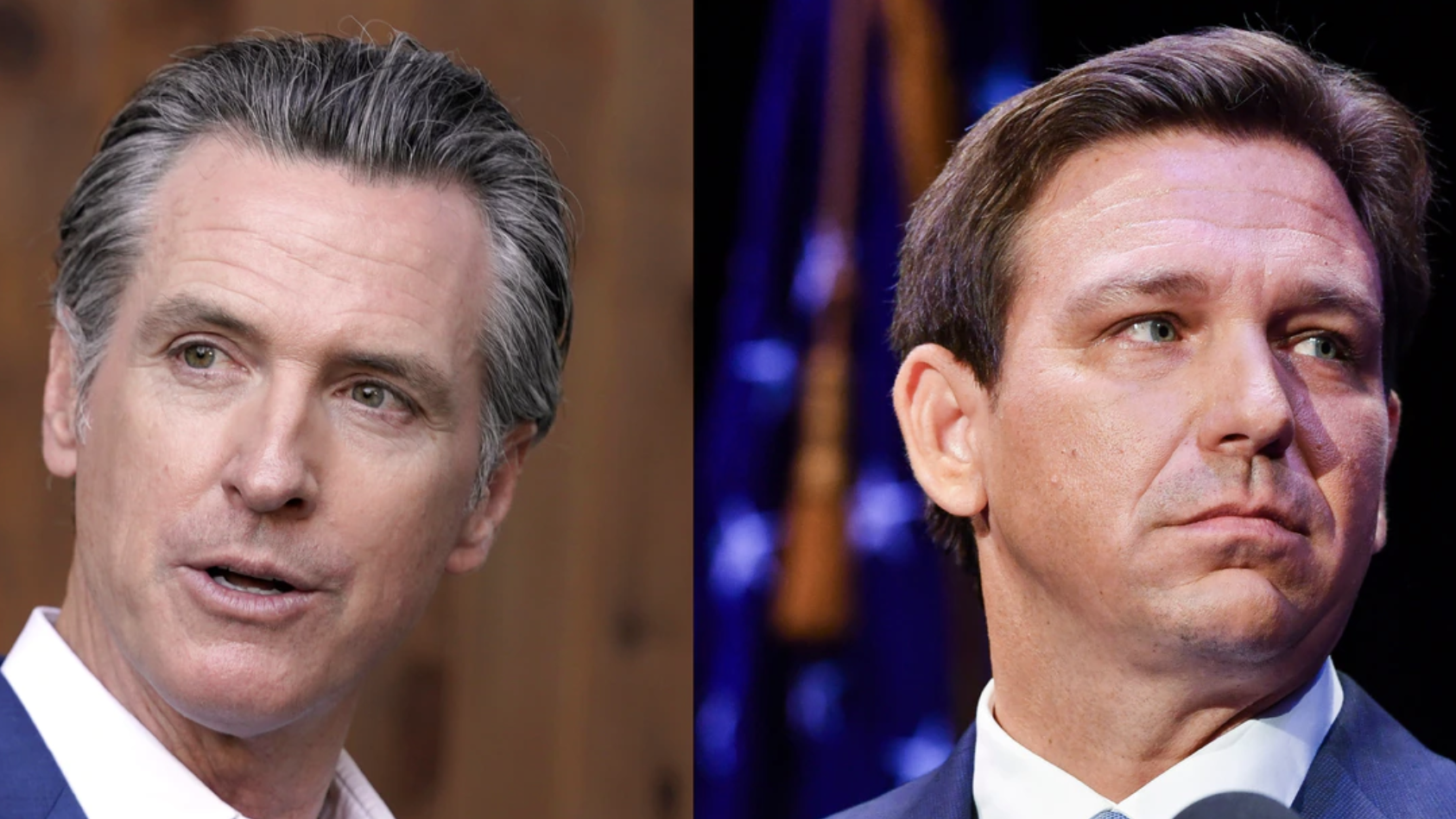 Governors Gavin Newsom and Ron DeSantis are widely viewed as potential rivals for president in 2024. Each just won landslide re-election based on widely divergent definitions of 'health freedom' ...

SACRAMENTO, Calif. (AP) — Gavin Newsom and Ron DeSantis, governors of states on opposite ends of both the country and the political spectrum, held up their governing styles this week as models for the nation ahead of the 2024 presidential election as they rushed to use their convincing midterm victories to stake a claim on the nation’s most enduring political promise: Freedom.

“We affirmed clearly with conviction that we are a true freedom state,” Newsom, a Democrat in California, declared on Tuesday after handily winning a second term.

“We stood as a citadel of freedom for people across this country, and indeed across the world,” DeSantis, a Republican in Florida, told a raucous crowd of supporters after cruising to his own second term.

But both men define “freedom” in vastly different ways. For Newsom, freedom means the right to say yes: To an abortion, to government-funded health care for immigrants, to gender-affirming care for children.

For DeSantis, freedom means the right to say no: To COVID vaccines, to illegal immigration, to what he calls “indoctrination” on sexual orientation and gender identity in public schools.

Both messages have worked on smaller scales, solidifying each governor’s hold on one of the nation’s most populous states and propelling them as leaders of their political parties.

Now, Newsom and DeSantis appear poised to take their messages nationally — a competition that could clash in a presidential campaign.
Newsom has sought out that conflict, running a TV ad in Florida over the summer to tell Floridians that “freedom is under attack in your state” and urging them to move to California.

At every public appearance, Newsom doesn’t miss an opportunity to criticize Florida or Texas, often mentioning DeSantis by name and referring to him as a bully.

“That zest for demonization coming from the other side, these red states where, you know, there’s a cruelty, talking down to people, bullying people, making them feel lesser,” Newsom said.

DeSantis often refers to Florida as “The free state of Florida” and attributes recent population growth in the state to people “voting with their feet” against coronavirus restrictions and liberal policies — a reference to California, which lost population for the first time in 2020 and lost a congressional seat.

“The woke agenda has caused millions of Americans to leave these jurisdictions for greener pastures,” DeSantis said. “Florida, for so many of them, has served as the promised land.”

Whether Newsom and DeSantis meet on the campaign trail in 2024 or later this decade is the big question, as both face obstacles from other prominent members of their party.

For Newsom, it’s President Joe Biden and Vice President Kamala Harris, both of whom he has said he supports to be president. For DeSantis, it’s former President Donald Trump, who is expected to announce a presidential campaign next week and is already taking shots at the Florida governor.

“It’s like two boys fighting while their dads are still in the room,” she said. “They are both very much the substitute teachers waiting in the wings.”

Newsom has said he’s not running for president and pledged to complete his full four-year term, though politicians have broken such promises before. DeSantis, notably, has made no such commitment.

He smiled on Tuesday as his supporters loudly chanted “two more years,” a nod to his potential early exit as Florida’s governor should he be elected president in 2024.

When not sparring directly, policies from Newsom and DeSantis clearly outline different futures for the country.

Newsom imposed some of the nation’s most severe coronavirus restrictions, as well as vaccine mandates for government employees and health care workers.

And he used public money to give free health care to low-income immigrants living in the country without legal permission.

DeSantis, meanwhile, signed a law to let workers opt out of their employers’ COVID vaccine mandates. He banned abortion after 15 weeks of pregnancy.

He enacted a measure that forbids instruction on sexual orientation and gender identity in elementary schools up to third grade, a rule critics dubbed the “don’t say gay” law.

And he poked his rivals by using public money to bus immigrants living in the country illegally from Florida to Democratic-led states.

“Freedom” has been a popular talking point for Republicans for years, often accompanied by words like “faith” and “family.” Newsom is using it deliberately as an attempt to reclaim the word for Democrats, part of his strategy to overhaul the party’s messaging. He has done the same thing with other Republican calling cards, including referring to California as a “pro-life” state because of its commitment to public health.

“We are the freedom party, and his view is we should say it,” Newsom campaign spokesman Nathan Click said.

Jamie Miller, a former executive director of the Florida Republican Party, said DeSantis has gained broad appeal through logical governance and a willingness to stand his ground on thorny issues.

“The message he put out is, ‘I’m for the people, I’m for parents, I’m for logic,” Miller said, referencing the governor’s pandemic policies and a new law banning lessons on sexual orientation and gender identity in kindergarten through third grade.

“DeSantis has been certainly tough, certainly ready for the moment. He’s not afraid to fight for his convictions of what he thinks is best for Floridians and what’s best for the American people,” Miller said.
___
Izaguirre reported from Tallahassee, Florida.