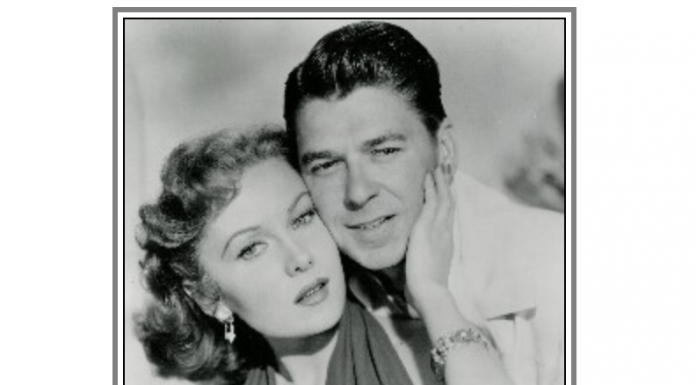 “A loving tribute to one of my favorite leading men with whom I made four films in the 1950’s – In retrospect, I recall him to be a very fine actor and a warm ingratiating friend he was a kind, caring, considerate man, who with his charm and wit kept our movie sets laughingly happy with all his wonderful humor — never dreaming I was working with the future 40th president of the United States.” – Rhonda Fleming

LOS ANGELES (AP) — Actress Rhonda Fleming, the fiery redhead who appeared with Burt Lancaster, Kirk Douglas, Charlton Heston, Ronald Reagan and other film stars of the 1940s and 1950s, has died. She was 97.

From her first film in color, “A Connecticut Yankee in King Arthur’s Court ” (1949) with Bing Crosby, Fleming became immensely popular with producers because of her vivid hues. It was an attraction she would later regret.

“Suddenly my green eyes were green. My red hair was flaming red. My skin was porcelain white,” Fleming remarked in a 1990 interview. “There was suddenly all this attention on how I looked rather than the roles I was playing.

“I’d been painted into a corner by the studios, who never wanted more from me than my looking good and waltzing through a parade of films like ‘The Redhead and the Cowboy,’” she said.

Before Reagan entered politics, the actress co-starred with him in “Hong Kong,” “Tropic Zone,” “The Last Outpost” and “Tennessee’s Partner.”

“He surprised everyone because he never looked in a mirror,” she once said of Reagan. “How many actors can you say that about?”

Fleming possessed a fine singing voice, and later in her career sang onstage in Las Vegas and in a touring act.

In the big-studio era, many new personalities were publicized as having been discovered in quirky ways: Kim Novak while riding a bicycle past an agent’s office, Lana Turner spotted in a malt shop.

In Fleming’s case, young Marilyn Louis was reported to have been headed to class at Beverly Hills High School when a man followed her in a big black car and told her, “You ought to be in pictures.” She eluded him, but he turned up at her home and offered to be her agent.

Legend or not, at 19 Louis was awarded a six-month contract at the studio of David O. Selznick and a new name: Rhonda Fleming. She played a bit part in the 1944 wartime drama “Since You Went Away,” and then Alfred Hitchcock chose her to play a nymphomaniac in “Spellbound,” starring Ingrid Bergman and Gregory Peck.

“I rushed home, and my mother and I looked up ‘nymphomaniac’ in the dictionary,” she recalled. “We were both shocked.”

“Spellbound” led to another suspense film, “The Spiral Staircase,” in which she was strangled by the villain, George Brent. With Selznick concentrating on the career of his wife, Jennifer Jones, he lost interest in his contract players, and Fleming left the studio to freelance …

“Like her peer Maureen O’Hara, Ms. Fleming was sometimes referred to as the Queen of Technicolor; both actresses had glamorous red hair, green eyes and fair skin. But in later years, she looked back on that as a drawback.” – The New York Times

Her next films: “Abilene Town,” a Randolph Scott Western; “Out of the Past,” a film noir with Robert Mitchum; and “Adventure Island,” a tropics thriller starring Rory Calhoun.

She won a role in “A Connecticut Yankee,” a Crosby musical based on the Mark Twain story, after Deanna Durbin dropped out to retire to France. Crosby was so impressed that he recommended her to Bob Hope, with whom she starred in “The Great Lover.”

Ironically, the Crosby/Hope films that established her as a luminary proved to be ones she was never able to top. She remained a star for 15 years, but except for the Lancaster-Douglas “Gunfight at the OK Corral,” most of her performances came in B pictures that exploited her looks.

“I made the mistake of doing lesser films for good money,” she reflected in a 1976 interview. “I was hot — they all wanted me — but I didn’t have the guidance or background to judge for myself.”

Among her 1950s films were “While the City Sleeps,” directed by Fritz Lang and co-starring Dana Andrews. She played Cleopatra in the 1953 film “Serpent of the Nile.”

But many titles were forgettable: “The Eagle and the Hawk,” “The Last Outpost,” “Little Egypt,” “The Killer Is Loose,” “Slightly Scarlet,” “Crosswinds” and “Pony Express” (with Charlton Heston), “Inferno,” “Those Redheads from Seattle,” “Yankee Pasha,” and “Gun Glory.”

After her film career cooled off, Fleming took a singing act to Las Vegas, appeared in TV shows and commercials, starred on Broadway in a revival of “The Women” and sang as the temptress Lalume in “Kismet” for the Los Angeles Civic Light Opera.

She was born in Los Angeles in 1923. Her mother, Effie Graham, had appeared in a 1914 Broadway musical with Al Jolson, and her grandfather was a theatrical producer in Salt Lake City. She studied acting, but as a backup also took classes in shorthand, typing and bookkeeping.

While still in her teens, Fleming married her high school sweetheart, Thomas Lane. A son, Kent, was born in 1941. When Lane returned from Army service, Rhonda had become a star, and the marriage ended in 1947. Three other marriages also ended in divorce, to Beverly Hills surgeon Lewis Morrill (1952-1958); actor Lang Jeffries (1960-1962); and producer-director Hall Bartlett (1966-1972).

In 1977, Fleming married mogul Ted Mann, who built the Mann Theater chain, and the marriage lasted until his death in 2001. For many years, they lived in matching 4,300-square-foot condominiums, one on top of the other in a Century City high-rise.

“I treasure my privacy, and Ted needs his,” she once explained. “We love each other very much. I’m much more fulfilled today than at any time in my life.”

After Fleming’s sister, Beverly Engel, died of cancer in 1991, Fleming and her husband established the Rhonda Fleming Mann Resource Center for Women with Cancer at the UCLA Medical Center. They also was active in various other charities for cancer patients, children and the homeless.

A couple of years after Mann died, Fleming married for a sixth time, to Derol W. Carlson, who died in 2017.

A native-born Californian, Rhonda Fleming attended Beverly Hills public and private schools. Her mother, Effie Graham, was a famous model and actress in New York. She has a son, Kent Lane, and two granddaughters, Kimberly and Kelly.

She has appeared in over 40 motion pictures, starting with top featured roles in David O. Selznick’s SPELLBOUND, directed by Alfred Hitchcock, RKO’s OUT OF THE PAST and THE SPIRAL STAIRCASE and leading into starring roles in classics such as CONNECTICUT YANKEE IN KING ARTHUR’S COURT, GUNFIGHT AT THE OK CORRAL, HOME BEFORE DARK, PONY EXPRESS, SLIGHTLY SCARLETT, WHILE THE CITY SLEEPS and THE BIG CIRCUS.

In addition to motion pictures, Miss Fleming starred in her Broadway debut in Clare Booth Luce’s THE WOMEN, and in the role of LALUME in KISMET at the Los Angeles Music Center, and toured as MADAME DUBONNET with THE BOYFRIEND. She made her stage musical debut in Las Vegas at the opening of the new Tropicana Hotel’s showroom.

Later, she appeared at the Hollywood Bowl in a one-woman concert of Cole Porter and Irving Berlin compositions. She also starred in a national ten-week concert tour with Skitch Henderson featuring the music of George Gershwin. She has guest-starred on numerous major television shows including WAGON TRAIN, POLICE WOMAN, LOVE BOAT, a two-hour production, THE LAST HOURS BEFORE MORNING, and a two-hour special of McMILLAN AND WIFE. The 1990 television production, WAITING FOR THE WIND, reunited her with her former co-star, Robert Mitchum.

In private life, Miss Fleming resides in Century City with her new husband, Darol W. Carlson. Rhonda was married for 23 years to Ted Mann, producer and chairman of MANN THEATRES, until his death in January 2001.

Miss Fleming was a founding member of STOP CANCER with Dr. Armand Hammer started in 1988.

She is an Ambassador of CHILDHELP USA, ARCS (ACHIEVEMENT REWARDS FOR COLLEGE SCIENTISTS); a Life Associate of PEPPERDINE UNIVERSITY; a Lifetime Member of the FREEDOMS FOUNDATION AT VALLEY FORGE; a Founding Member of the FRENCH FOUNDATION FOR ALZHEIMER RESEARCH; a Benefactor of the LOS ANGELES MUSIC CENTER: and a Member of the Center’s Blue Ribbon Board of Directors.

She is a Member of the Advisory Board of OLIVE CREST TREATMENT CENTERS FOR ABUSED CHILDREN, and served as a Board of Directors Trustee of WORLD OPPORTUNITIES INTERNATIONAL. Miss Fleming is also a member of the GUIDEPOSTS National Advisory Cabinet, as well as being an active member of the New Century Circle and Public Relations Boards of the SAINT JOHN’S HEALTH CENTER FOUNDATION.

In addition, she created at the CITY OF HOPE the RHONDA FLEMING MANN RESEARCH FELLOWSHIP to further advance research and treatment associated with women’s cancer. In 1991, Miss Fleming established in memory of her sister Beverly, the RHONDA FLEMING CLINIC FOR WOMEN’S COMPREHENSIVE CARE at the UCLA Medical Center.

This Clinic provides a full range of expert gynecologic and obstetric care to women from all walks of life. She also founded in 1992 the Rhonda Fleming Resource Center for Women with Cancer at UCLA.

In May 1997, Rhonda opened Reflections, a unique retail store and consultation suite that carries wigs, headcoverings, breast prostheses and other items to help men, women and children deal with the physical appearance changes brought on by cancer and its treatments. The staffs of the clinic and store are guided by her belief that caring, compassion, communication and commitment are essential components of the healing process.

Currently Miss Fleming is also on the Board of P.A.T.H.(People Assisting the Homeless) and established the Rhonda Fleming Family Center at P.A.T.H. to house women and children off the street. Offering many services including job training, job placement, education for mothers and children, medical care, social services and legal advice.

John 6:35 – I am the bread of life. He who comes to me, shall never hunger, and he who believes in me shall never thirst”