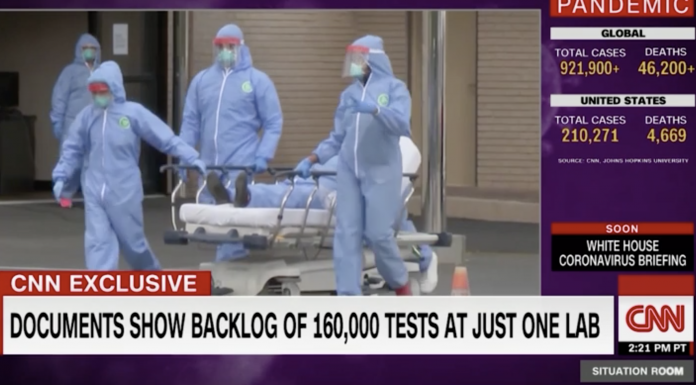 CNN – On a day several more states, including Florida, told most of their residents to stay at home, the number of US coronavirus cases skyrocketed past 200,000 on Wednesday.

The news comes while debate revs up on whether all Americans should be wearing a mask.

As of Wednesday afternoon, more than 210,000 people in the United States have been infected, and at least 4,703 have died. The number of fatality reports again reached a new daily high, with more than 900 reported.

One of the deaths was a 6-week old in Connecticut, Gov. Ned Lamont said.

More data showing people without symptoms are fueling the spread has top US officials rethinking whether the general public should be wearing masks.

But the World Health Organization, while it says it is reviewing its advice, tells people there is no need to keep your mouth covered if you are not a patient or health worker.

Concerning new data from Iceland shows 50% of those who tested positive said they were asymptomatic.

In the US, an estimated 25% of coronavirus carriers have no symptoms, said the director of the Centers for Disease Control and Prevention.

“Information that we have pretty much confirmed now is that a significant number of individuals that are infected actually remain asymptomatic. That may be as many as 25%,” CDC Director Dr. Robert Redfield told NPR.

To prevent further spread, the top infectious disease expert in the US says health officials are reconsidering guidance on face masks.

Dr. Anthony Fauci said he would “lean towards” recommending that the general public wear face masks “if we do not have the problem of taking away masks from the health care workers who need them.”

“We’re not there yet, but I think we’re close to coming to some determination,” Fauci said … Read more.

China Reports 130 Asymptomatic Cases of Coronavirus in One Day

Bloomberg News– China reported 130 people over the past day who were infected with the novel coronavirus but don’t have symptoms, a sign that the group of people who can spread the virus without being detected is sizable.

The tally, the first daily count of so-called asymptomatic patients, establishes a new benchmark to measure the scope of the outbreak amid a growing chorus of domestic and international criticism of China’s data.

China late Tuesday said 1,541 asymptomatic people have been put under observation. Wednesday’s data confirms that figure was a cumulative total, though it isn’t clear if the number represented people currently in medical quarantine or if it included those who were symptom-free but have since recovered and been released.

The disclosures of asymptomatic infections come after Chinese Premier Li Keqiang urged local officials to prioritize efforts to track and expand the screening of symptom-free carriers.

In China, people who test positive for the virus but don’t have any symptoms are not classified as confirmed cases.

This runs counter to the practice in countries like South Korea, Japan and Singapore, where all patients who test positive are included in official tallies of total cases, regardless of whether they have symptoms such as a fever or cough.

China’s total count of confirmed Covid-19 infections stands at more than 81,000, but the vast majority have recovered and been released.

Cases of asymptomatic virus infections are still being found, local magazine Caixin reported, even after China said its daily confirmed case tally hit zero for the first time two weeks ago. That’s fueled doubt over whether the epidemic that broke out in the central Chinese city of Wuhan in December is truly over.

China says it tracks and quarantines asymptomatic cases and reclassifies them as confirmed cases if and when they develop symptoms … Read more.