CNN – The Norwegian government euthanized its celebrity walrus Freya on early Sunday morning, after warning the public to stay away from her.

“The decision to euthanize the walrus was made based on an overall assessment of the continued threat to human safety,” said Frank Bakke-Jensen, the director general at the Norwegian Directorate of Fisheries, in a news release.

Freya became a social media sensation this summer, Rune Aae, who teaches biology at the University of South-Eastern Norway and manages a Google map of Freya sightings, told CNN. The young female walrus had been spending time at the Oslo Fjord, an inlet on the country’s southeastern coast, and was seemingly unafraid of humans, unlike most walruses. Several popular videos show the walrus clambering onto small boats to sunbathe.

In the past week, the directorate warned the public to stay away from Freya, saying that they had observed visitors swimming with Freya, throwing objects at her, and getting dangerously close to her to take photos. “The public has disregarded the current recommendation to keep a clear distance to the walrus,” Nadia Jdaini, spokesperson for the Norwegian Directorate of Fisheries, told CNN in an email.

Previously, the directorate told CNN that it was considering multiple solutions, including relocating Freya out of the fjord. But “the extensive complexity of such an operation made us conclude that this was not a viable option,” Bakke-Jensen said in the news release.

“We have sympathies for the fact that the decision can cause reactions with the public, but I am firm that this was the right call,” Bakke-Jensen continued.

“We have great regard for animal welfare, but human life and safety must take precedence.” The directorate included a photo of a large crowd seemingly just feet away from Freya in its release … READ MORE.

“They will kill you!”

DAILYMAIL.COM – A scary moment occurred when tourists were warned not to get too close to a fight between two bison near Yellowstone National Park, as traffic came to a full stop.

The brawl was caught on tape on August 8, and it began when two brown-furred bison locked horns in the middle of a road, prompting visitors to stop their vehicles to watch the showdown from the side.

That’s when two elderly park visitors got out of their cars and walked just a couple of yards way form the brawl, eager to film it on their phones.

Once they had gotten a little to close to the animals, two women are heard on camera telling them to ‘back up’, warning them that ‘they will kill you.’

‘Holy crap, look at this power, wow!’ one woman said in the video. ‘My heart is thumping,’ she added.

‘Oh here come a referee,’ one man can be heard commenting in the video, referring to a vehicle of park rangers responding to the incident.

‘Look at the fur on the road,’ said another woman in the video, pointing out the amount of wool the two bison lost during the fight.

Video of the bison fight was filmed by Cindy Shaffer, who is known for routinely capturing video from the park.

Footage of the incident was recorded by Cindy Shaffer, who wrote ‘What not to do in Yellowstone!!!’ as a caption, referring to the two tourists who were warned to back up from the bison fight … READ MORE.

If an animal is reacting to you, you are too close.

UNOFFICIAL NETWORKS – All wildlife in Rocky Mountain National Park are wild animals and they should be given respect and space to be … wild.

For moose and bears, keep back at least 120 feet or 36 meters. That’s more than two school bus lengths.

Don’t ask how close you can get, ask how far you should stay back. Learn more safe wildlife viewing tips HERE. 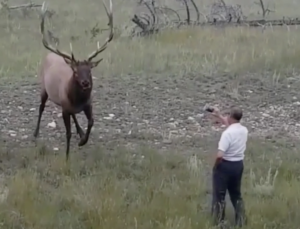 What is wrong with this picture taken recently in Rocky Mountain National Park?

CORRECT ANSWER: E (ALL OF THE ABOVE) … READ MORE.