How Safe Are Grocery Stores Really? 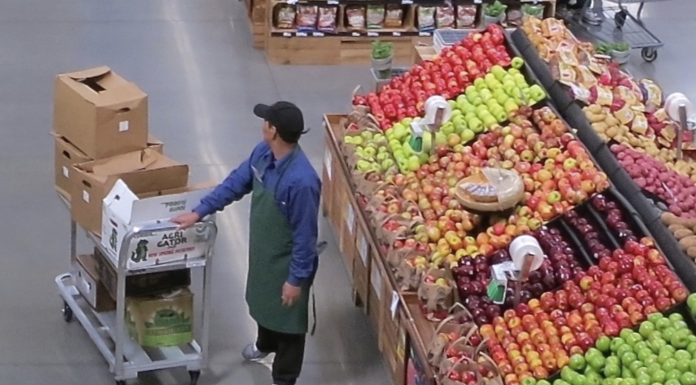 KPBS – San Diego resident Leslie Padilla said it’s been over a week since she last went grocery shopping. On Monday, she shuffled into a Trader Joe’s on the San Diego State University campus.

“Yeah, I’m anxious I haven’t been grocery shopping in like 10 days and now I’m like out of everything,” Padilla said.

“So, I’m out just trying to keep my distance, as a lot of people are doing. I have been looking for toilet paper for about a month. And pretty soon it’s gonna get serious, because I haven’t found it anywhere. I think people need to calm down and keep distant.”

Meanwhile, other residents like Angela Barley are actively gearing up to go to the store. She used to work at Trader Joe’s, so she feels safe going to one.

“I think everywhere makes me a little anxious … I mean using the gas pump makes me anxious. But as long as we are taking precautions, I’m not super worried,” she said.

With a handful of local food supply workers testing positive for the coronavirus, many people are wondering just how safe the food supply is. Workers have also shown concern.

The Associated Press reports that “Whole Worker, a workers group for Whole Foods employees, is calling for a nationwide ‘sick out’ on Wednesday.”

But despite the anxiety, stores are still getting packed. That’s because food is essential.

County officials said restaurants and grocery stores are following the Centers for Disease Control and Prevention guidelines to sanitize facilities and socially distance customers and staff. Many stores around the country are limiting the number of people who can enter at once.

But county health officials said some workers in San Diego had still gotten sick, including one at an Albertsons in Escondido … Read more.

NEW YORK (Reuters) – A group of workers at Whole Foods Market called on others to phone in sick at all of the grocer’s stores on Tuesday to protest what they say is a lack of adequate compensation and protections from the coronavirus.

The group, known as Whole Worker on Twitter, describes itself as a grassroots movement of Whole Foods team members working to unionize.

As millions of people shelter in place in the United States and non-essential businesses are shuttered to halt the spread of the virus, grocery stores and pharmacies are staying open to supply food and medicine.

The Whole Worker group is demanding, among other things, hazard pay and the immediate shutdown of any location where a worker tests positive for COVID-19 … Read more.