THE NEW YORK TIMES – The number of new daily U.S. cases has risen less over the past week than at any point since June, as you can see in this chart: 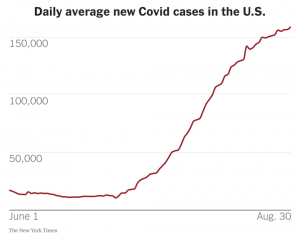 There is obviously no guarantee that the trend will continue. But there is one big reason to think that it may and that caseloads may even soon decline.

Since the pandemic began, Covid has often followed a regular — if mysterious — cycle. In one country after another, the number of new cases has often surged for roughly two months before starting to fall. The Delta variant, despite its intense contagiousness, has followed this pattern.

After Delta took hold last winter in India, caseloads there rose sharply for slightly more than two months before plummeting at a nearly identical rate.

In Britain, caseloads rose for almost exactly two months before peaking in July. In Indonesia, Thailand, France, Spain and several other countries, the Delta surge also lasted somewhere between 1.5 and 2.5 months. 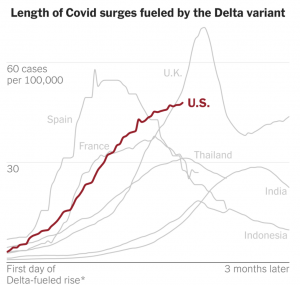 * Between February and July 2021, depending on the country.Credit…The New York Times

And in the U.S. states where Delta first caused caseloads to rise, the cycle already appears to be on its downside. Case numbers in Arkansas, Florida, Louisiana, Mississippi and Missouri peaked in early or mid-August and have since been falling: 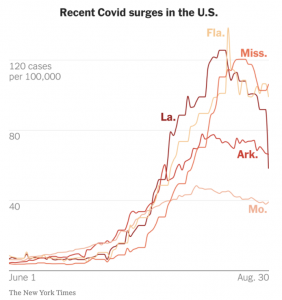 We have asked experts about these two-month cycles, and they acknowledged that they could not explain it. “We still are really in the cave ages in terms of understanding how viruses emerge, how they spread, how they start and stop, why they do what they do,” Michael Osterholm, an epidemiologist at the University of Minnesota, said.

One involves the virus itself. Rather than spreading until it has reached every last person, perhaps it spreads in waves that happen to follow a similar timeline.

How so? Some people may be especially susceptible to a variant like Delta, and once many of them have been exposed to it, the virus starts to recede — until a new variant causes the cycle to begin again (or until a population approaches herd immunity).