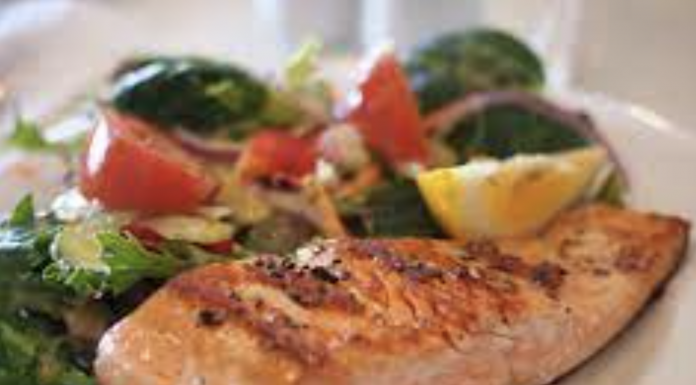 OPINION By Thomas Gremillion on June 9, 2021

FOOD SAFETY NEWS – Recently, I did something I had not done in a long time. I ate in a restaurant with my family.

Actually, we ate on the outdoor patio, since my kids are too young to be vaccinated and we are somewhat more squeamish than average about COVID, but it was nevertheless a refreshing return to normality and a welcome rest from battling traffic on the way to the Delaware seashore.

I ordered a salad with blackened salmon. If we make the trip again, I will make a different choice.

That’s because last week, biotech company AquaBounty Technologies Inc. announced that it is harvesting several tons of genetically modified salmon, which will soon be sold at restaurants and other “away-from-home” dining retailers around the country.

So far just one distributor — Philadelphia-based Samuels and Son Seafood—has reportedly said that it will be selling the novel salmon. But AquaBounty has announced plans to sell its salmon via “food service channels” across the Midwest and East Coast.

By selling to restaurants and cafeterias, rather than retailers, AquaBounty can avoid the federal GMO labeling law. And this sets a troubling precedent. Consumers who do not want to eat GMO fish will have to avoid salmon altogether when dining out.

There are many reasons why someone might not wish to consume meat from genetically engineered animals. They may not trust the U.S. Food and Drug Administration’s (FDA’s) safety assessment of the food.

FDA conducted a lengthy review process of AquaBounty’s salmon, and concluded that it was no different in its nutrition profile and levels of hormones than conventional farm-raised salmon. But the salmon is a novel food, and some consumers may justifiably want to take a “wait and see” approach.

Other consumers may have concerns about the environmental risks associated with bioengineering animals, including the risk of “transgenic contamination,” whereby escaped GMO species crossbreed with native fish.

Last year, a federal court ruled in favor of the advocacy group Center for Food Safety, ordering FDA to conduct an environmental assessment of its AquaBounty approval that takes the risk of fish escaping and reproducing in the environment into account.

However, the judge allowed FDA’s approval to stand pending completion of that assessment, because he deemed the near-term risk of such environmental harm to be low.

A consumer may worry that genetically engineering animals could harm animal welfare, just as conventional breeding has in some cases, or even that genetic engineering is fundamentally incompatible with the increasing recognition that livestock animals (and all sentient animals) deserve some moral standing, independent of their value as a commodity.

A consumer may see genetically engineered animals as synonymous with a corporate takeover of the food system, or as an affront to indigenous communities who have traditionally depended on wild salmon. This concern features prominently in Aramark’s statement explaining its decision not to serve GMO salmon.

Aramark is not alone. Compass Group, Sodexo, Costco, Kroger, Walmart and Whole Foods have all pledged not to sell GMO salmon, at the behest of groups like the Center for Food Safety. But plenty of other outlets have made no such commitment, including (as far as I can tell) the restaurant where my family ate the other day.

AquaBounty and its supporters have a lot of good responses to concerns about GMO salmon, and ultimately, their arguments may win out in the court of public opinion. Personally, while I might aspire to one day eat an exclusively vegan, locavore diet that makes the world a better place with every bite, I might try the GMO salmon myself at some point.

At the very least, they should have the chance to notice whether this novel food tastes any different than its conventional counterpart. Pretending like this information is not important is an insult to the public, and creates the risk of a backlash that could erode confidence in both genetic engineering technology and the food system as a whole.

From what I know about FDA’s food safety assessment, AquaBounty’s salmon seems safe to eat. But food safety concerns will nevertheless lead me to abstain from salmon of questionable origin for the foreseeable future. I want what I eat to contribute to a safer food system.

And all else equal, a safer food system is a more transparent food system. How much transparency do we need? Reasonable people will disagree. But for me, secretly serving unsuspecting restaurant patrons genetically engineered salmon—or pork or whatever else gets approved by FDA—deserves protest.

That’s a shame because a lot of difficult problems—from climate change to antibiotic resistance to invasive species—might conceivably get easier with the help of genetic engineering. But without public support, or trust, the technology is more likely to just serve the bottom line of a few unscrupulous companies.