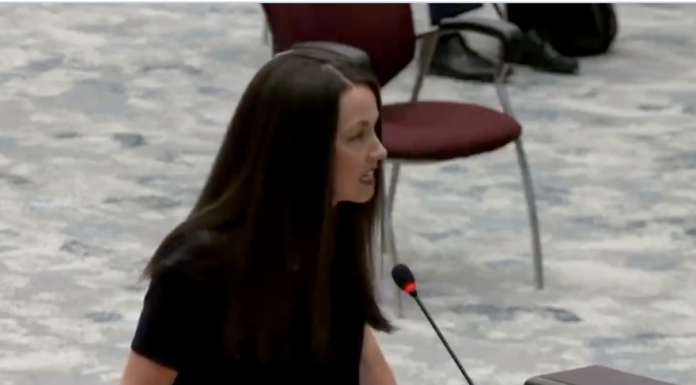 FOX NEWS – A Georgia mother of three went viral this week after she sounded off on her children’s school board continuing its mask mandate through next year.

Courtney Ann Taylor slammed members for forcing children to wear masks and socially distance at school, despite there being little evidence small children can contract a severe case of coronavirus.

She also argued that it’s been more than a year since the pandemic began, vaccines are available and every adult in Georgia is eligible.

“I think month after month I have been waiting for this mask requirement to end or at the very least ease up, and there’s just no end in sight and nobody’s even having the discussion about when this is going to stop,” Taylor said.

In her viral speech, Taylor said her 6-year-old daughter has personally complained, saying she doesn’t want to wear the mask anymore.

“It’s really heartbreaking to me. For her, her, my two-year-old, but yes, my oldest is in kindergarten and kindergarten is supposed to be fun and they play together, they learn how to play together … ” Click here to read more.

This is Courtney Ann Taylor, a mother in Georgia. She’s one of the many parents who’ve HAD IT with mask mandates, especially for young kids in school.

Do you need to wear a mask outside? CDC reconsidering

RALEIGH, N.C. (WNCN) – CDC director Rachel Walensky said earlier this week that the agency will look at whether masking is still recommended outdoors.

Doctors say deciding to put on your mask outside depends on a number of factors.

North Carolina’s mask mandate is still in place. It says face coverings should be worn outdoors when it is not possible to consistently be physically distant by at least 6 feet from people outside your household.

Gov. Roy Cooper announced earlier this week he could relax face-covering restrictions when two-thirds of adults are vaccinated.

The CDC’s guidance on masking outdoors still isn’t definitive. It says “masks may not be necessary when you are outside by yourself away from others, or with people who live in your household.”

A study from the Journal of Infectious Diseases found fewer than 10 percent of infections happened outside. It also found you are 19-times more likely to be infected indoors than outdoors.