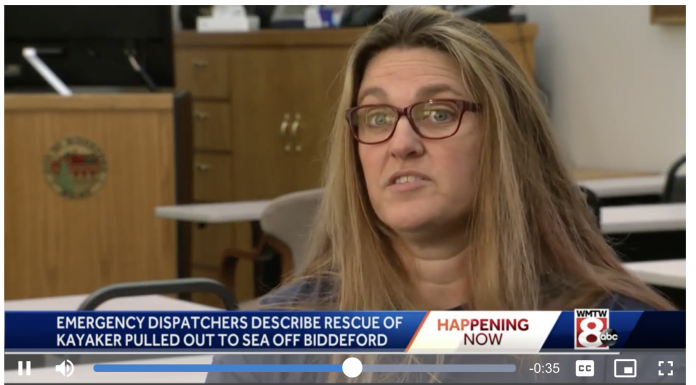 WMTW | BIDDEFORD, Maine — Whenever dispatchers Dylan Martin and Lori Penney take a 911 call, one of the first and most important questions they ask each caller is “where are you?”

That question proved especially important on Tuesday when a call came in from a kayaker off the coast of Biddeford who had gotten caught in fast-changing weather and dragged more than a mile offshore.

“He didn’t have a clue where he was. He was nervous, he was scared,” Martin said.

Using call-tracking technology, the dispatchers were able to ping the kayaker’s location in the open ocean and alert nearby rescue teams.

A local fire department was forced to turn back to shore because of bad weather, leaving the rescue in the hands of the U.S. Coast Guard.

“He was obviously very nervous, but it’s our job to try and keep him calm,” Penney said … Click here to read more.

HFD says a 911 call was received at 4:13 p.m. Thursday that reported the two hikers needed to be rescued because they could not continue hiking due to their location on the trail.

HFD says the hikers, both 19-year-old men, had been on the trail since approximately 10:15 a.m.

The first HFD unit arrived at the scene at 4:32 and established communication with the hikers through cell phone … Click here to read more.